NAFTA SuperHighway to Super Natural BC

What does the Super Highway as proposed to run from southern Mexico through the United States to northwestern British Columbia, Canada have to do with the sale of BC Rail? BC Rail is the end of the line, the culmination of the Master Plan where the last pieces of the jigsaw fall into place!

The proposed "Super Highway" will be a 10-lane highway. Can you imagine how much arable land that will gobble up! The super highway location also has extensive trackage in the central United States along the Mississippi River valley from the Great Lakes to the Gulf of Mexico. 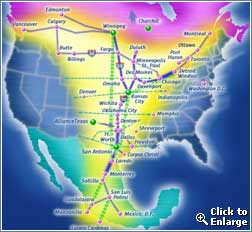 Proposed Super Highway
Overlay the proposed 10-lane highway with the Rail lines as pictured below:

BC Ports Strategy – BC Government quote:

“Canada’s prosperity depends upon its success in world trade. British Columbia’s ports make this trade possible. They handle half of Canada’s maritime exports and 85% of the western provinces marine exports from grain, coal and forest products to petroleum and petrochemicals.”

Existing west coast port facilities are severely limited in their ability to expand. The current congestion on southern highway and rail lines is economically impacting delivery times and cost. The new Port of Prince Rupert will be focused solely on the movement of containers, grain and coal.

There are three deep-sea port locations in British Columbia connected to the continental highway and rail grid: the lower mainland, Prince Rupert and Kitimat.

Today Kitimat has three privately owned terminals used strictly for the owners' specific operations but, uniquely in the province, there is foreshore land in Kitimat that has been identified as available and developable for a deep water break bulk facility.


Raw log exports, dirty coal from B.C. and gas from the tar sands of Alberta all shipped out through the calm seas of the Inside Passage. How convenient to have a trade agreement called TILMA! And, when the government statement says that “more efficient, cost-effective shipping” will be the result, it does not mean for the province, it means for business. After all, Campbell has and is seeing to it that all assets once held by the people of this province are being sold off and not always to the highest bidder.

When Campbell sold BC Rail, he didn’t make money for the province. BC Rail sold at bargain basement prices, all to the advantage and “cost-effectiveness” of business. It was a set-up for the benefit of business.

BC Rail was a class II regional railway and the third largest in Canada, operating 2,320 km (1,441 miles) of mainline track. BC Rail was owned by the provincial government from 1918 until 2004, when it was sold to Canadian National Railway and now operates under the reporting marks of the Association of American Railways.

Combined with the indignity of practically giving away the valuable asset of BC Rail, tankers are plying the waters off the northern coastline of BC...where they shouldn't be...in fact they are breaking environmental laws and a decades-long moratorium on transporting dangerous chemicals and gaseous cargo within the Inside Passage.

Quoting from the Backgrounder on Threats from Tankers in BC’s Inside Passage:

“1. Methanex, in partnership with Alberta-based Encana, is currently importing condensate, a natural gas byproduct used to dilute thick crude oil, in oil tankers to Kitimat where the dilutant is being offloaded onto railway cars for transport to Alberta. The condensate, a toxic mix of chemicals and petroleum derivates needed to ease the flow of oil through pipelines, is being imported from Belize and other places in South America as well as Asia. The condensate tankers are very large (50,000 dwt) and carry approximately 350,000 barrels of condensate.

2. Alberta-based energy giant Enbridge is seeking approval of a $4 billion project that would bring oil tankers into BC’s inside passage to ship 800,000 to 1,000,000 barrels per day of exported tar sands crude oil from a pipeline originating in Alberta to destinations in China, India and California. Three to ten tankers per week would travel 100 kilometers through the inside passage and coastal waters, another 140 kilometers up a fjord to transport crude from an oil tanker terminal in Kitimat, BC.

3. Both Enbridge and Kinder Morgan are seeking approval for competing pipelines that would transport 150,000 and 100,000 barrels per day each in imported “condensate” off tankers in Kitimat into a 1,200 km long pipeline bound for Alberta. Both these proposals are currently seeking regulatory approval.

4. Kitimat LNG has received a provincial environmental assessment certificate for a Liquefied Natural Gas (LNG) terminal in Kitimat. LNG is a very cold liquid natural gas approximately -260° F), containing mostly methane, but typically including other “hot” or “wild” hydrocarbons such as ethane and propane, and other toxic contaminants. Proposed LNG terminals are facing stiff opposition from communities across North America, with communities as diverse as Quebec City, Passamaquoddy Bay on the border of Maine and Nova Scotia, Malibu, Homboldt, Vallejo, Long Beach and Oxnard in California, Boston and Fall River in Massachusetts opposing LNG projects for environmental, security and health reasons.

5. Recently Pembina announced the $700 million Condensate Pipeline Project which if approved would transport 100,000 barrels a day of condensate from Kitimat to Summit Lake north of Prince George. From there Pembina will reverse the flow of existing pipeline currently carrying crude to ship condensate to the tar sands. Industry considers a 15% recovery of an oil spill a success; even in perfect conditions. A full recovery has never been achieved. Given that weather on the BC coast can be quite extreme with winds at over 25 knots in winter and waves reaching three stories in height- any spill in this region would have devastating environmental and economic consequences.

Tankers in the Inside Passage, coal mining in Northern BC, Alberta to look like a moonscape in no time flat with her rivers being poisoned and rumors of the Athabasca running out of water as industry gobbles up 5 gallons of water to make one gallon of gas. And, as if there isn’t enough polluting of the planet I heard on CBC radio yesterday that China is planning on building 2,500 coal-fired plants with BC helping out, no doubt, through the exporting of coal. Sheer madness.

Now we know, don't we, why the corporate media has been so quiet. There's money to be made.

What part did we, the long-suffering, tax-paying citizens play in the sale of BC Rail. Anyone remember? The short answer is nothing. We weren’t consulted, neither were we asked. The Liberal gods dictated and so shall it be.

In the meantime a seismic shift has occurred with the world recognizing both peak oil and global warming while Campbell dreams of his Gateway Project to Asia. Does he care? No, not Campbell. Not the BC Liberals. Not the coal mining companies. Not the companies operating in the tar sands. Not CN Rail. Not China. None of them care. Not while the inmates are running the asylum.

ALASKA-CANADA RAIL LINE WOULD BE A BOON, STUDY SAYS

A railway linking Alaska to the rest of North America would create wider benefits even if freight revenue did not cover the projected $10.5-billion US construction cost, according to a new study.

Building a more than 3,300-kilometre line between existing railways in Alaska and Canada would spur mining development and open a new trade route to Asia, according to the report released this week by governments of the Yukon and the neighbouring state of Alaska.

The study suggests the rail link would likely have to be funded as a joint public-private project [Oh, what a surprise!! - BC Mary], because projected freight shipping revenues over 50 years would cover only about 75 per cent of the full $10.5-billion investment.

Comments:
Nice coverage, BC Mary - I don't often get perspective of the SPP from the Canadian side. Your site came up in a Google alert on the Superhighway.

I'm forwarding your encouraging message to Rita Dawson who researched and wrote the story.

So many of us have had to become Citizen Journalists, working hard where Big Media won't go, on so many issues of public interest. Rita is certainly one of the best of those citizens.

So how does the NAFTA-NASCO SuperCorridor look from your side??

It doesn't look good, bc mary. The power brokers have had this going under the radar for so long, that people are slow to realize the significance of what is surfacing. But the Border activists were onto it pretty quick. The things that is hardest to digest is the scope of the conspiracy. It's hard for me to get around it, and I've been watching, well, only 8 months, seems a lot longer. The more I dig, the worse the scenario looks. The good news is the Senators are beginning to wake up, prodded by Lou Dobbs, bloggers, etc. But they are not asking the really tough questions. My fondest hope is that Bush will go down. I was never against him before, being somewhat of a conservative, but this NAU project is so over the top, I'll never trust him again. Not ever.
But the cold fact is, it was launched long before Bush, and the mover-shakers behind the scenes are hard to get at. Kind of like the Federal Reserve Board.
Well, us bloggers are doing what we do, trying to reach as wide an audience as we can. America is in big trouble. She needs all the help she can get.
You can email me at: no.apology-at-yahoo.com.
Best to you. I'll keep in touch.
-NA

NA, we have enough troubles on the top side of the 49th parallel to keep us going ... but I surely wish you the best of luck in revitalizing all that was good in your own country. It's all inter-related, isn't it. Inter-related but not "the same thing".

This blog is about the B.C. Rail affair, which burst upon us in December 2003 with the unprecedented raid on our B.C. Legislature. It took us a while to realize that Big Media had a stranglehold on the issue and was keeping things very quiet; slowly we began to see that it might all be swept under the carpet if British Columbians didn't do something ourselves. We asked ourselves "Why?" many, many times.

As a result, 3 strong blogs took up the task of making available as much B.C. Rail evidence as possible: http://houseofinfamy.blogspot.com/ also http://freespeechca.blogspot.com/ and this one, http://bctrialofbasi-virk.blogspot.com/.

We're learning a lot. Much information is still behind the scenes as we do the research and analysis ... and the biggest single lesson is that the B.C. Rail Trial is huge. I always thought it was important but its impact is really, really HUGE. As time goes on (and on and on), you may find details to help you in your efforts, too.

The big worry is that the B.C. Rail issue -- embedded as it is with other large concerns -- will be shut down one way or another. You can read between the lines, as to why that might happen.