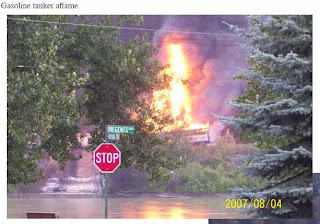 Did residents of the Prince George neighbourhood of “South Fort” dodge a bullet on the weekend when two CN trains collided on the tracks on the east side of the Fraser River?

The collision took place at 10:20 a.m., one train contained cars moving lumber products, and the other was hauling a host of tank cars. It appears that while CN executives knew what the tankers contained, others on the scene trying to prevent a potential disaster did not.

When asked if there were dangerous or hazardous products contained in any of the tank cars, Assistant Deputy Fire Chief John Lane said CN reps were on hand with the manifest, but just as soon as the train was uncoupled and the cars moved away from the scene, he had no reason to ask. ‘They were pulled from the scene so fast we didn’t know what was contained in those other tanker cars” said Lane.

The call to the fire department was received around 10:20 in the morning. Lane did a briefing with members of the media at noon. At that time, the tanker cars, with the unknown contents, were still coupled to the train. They are visible in the background of a digital photo taken at the time (see photo at right, taken at 12:02 p.m.)

While CN is not commenting, it is known that if it hadn’t been for the heroics of a CN employee who rushed to the derailment and uncoupled the two trains from the burning or at risk cars, the scenario might have been very different.

According to Lane, the car that was immediately to the north of the gasoline tank car contained either diesel or gasoline, but that is as far he went. Police sources say they were never informed about what was contained in the other cars.

CN spokesperson Kelli Svendsen, says the railway will not release the manifest of what was in the other cars as “they weren’t part of the incident”. Nor will CN release the name of the person who rushed in to uncouple the cars; it is not the company’s practice to release names of employees. One insider tells Opinion250 the person who risked their life to uncouple those cars may very well face discipline for putting himself in harms way.

.According to the safety standards employed by emergency response teams in all of North America, when dealing with a derailment like the one that happened in Prince George Saturday, the perimeter around the scene should be, at minimum, 800 meters, or ½ a mile.

Comments:
Why is it Mary that the public finds more complete information here at TRL than they can get in the MSM?

I hope you've sent a wake-up call to that journalist from the Sun who couldn't wait to belittle the 'problems' CN is having with OUR railroad.

Well done, and thanks to all the irregulars who helped.

That "re-defining" thing, for example. How did that happen? When did it happen? Is it actually legal?

Then there's that tanker which may or may not have been filled with gasoline and which, after quite some time, burst into flame. Well, hullooo? Gasoline is highly volatile. A leaking or open tank of gasoline in contact with even a tiny spark would've exploded ferociously. So what was it? And why can't they be honest with the public?

At first, remember, we were told that 5 tanker cars of Methane were on fire. If you saw the YouTube videos of the crash scene, you'll hear the hissing sound people described, "like a big barbeque", which more likely would have been Methane, rather than gasoline.

What a miracle, that YouTube on-the-spot evidence! No "product" entered the Fraser River, said the CN spokeslady, but there are the YouTube photos showing "product" flowing and flaming down the riverbank and into the water.

Then, throughout all this, I can't help but see the similarities with the B.C. Rail case for which Basi Virk Basi will go on trial. Last weekend in Prince George, oh yes, said the CN spokeslady, that CN train crash was an "employee error". But we know damwell that nobody at the employee level set either of those situations in play. Not the sale of B.C. Rail and not the dangerous practices evident in these multiple CN crashes.

But CanWest was there, both times, playing the same disingenuous game with the facts. Even bringing out the Hawaii script: "Who me? No, no, it's a federal matter," and "Train crash? It's the NDP grandstanding, is all."

Some days, I can scarcely believe what I'm reading and hearing. It's a story that just doesn't stop.

Thanks, G, for riding the rails with us.

Your blog keeps getting better and better! Your older articles are not as good as newer ones you have a lot more creativity and originality now keep it up!