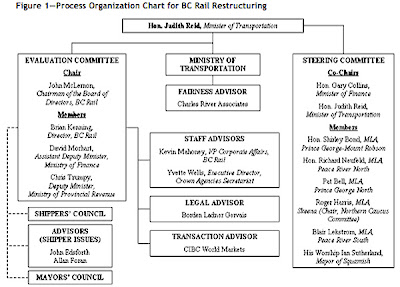 "When I am attacked," Richard Nixon once remarked to this writer, "it is my instinct to strike back." The president is in a mood to obey his instinct.......So on Wednesday, July 18th, at a White House meeting, it was agreed unanimously that the (Watergate) tapes should not be released.
Stewart Alsop, Newsweek, Aug 8, 1973

Now, unless he really and truly is a Machiavellian Superstar the likes of which this Province has never seen, it would appear that British Columbia Premier Gordon Campbell never expected it would ever come to this.

Being forced to release a bunch of 'conflicty' RailGate documents, that is.

Otherwise, as BC Mary pointed out earlier this week, why would Mr. Campbell have engaged in the following exchange with Opposition Leader Carole James in the Legislature way back in the Spring of 2007:

C. James: I appreciate that clarification, but just a question again around the privilege or, as you said, determining whether there's cabinet confidentiality or otherwise. Does the Premier agree that preventing document release through privilege is interference?

Hon. G. Campbell: This is an important issue; there is no question about that. I think it's important for the Leader of the Opposition to understand that the government's only real direction with regard to this was, from the outset, that it should be unfettered and independent — that we would remain away from both the decisions with regard to whether or not a case should proceed. Certainly, we don't intend to comment on what's taking place within the court.

Now, we would agree with Mr. Campbell that this is an 'important issue', especially now that one of the defendants, Robert Virk is seeking '17 documents' that he was involved in generating and/or apparently saw while he was still working with Mr. Campbell's government on the BC Rail deal.

Interestingly, Mr. Virk's lawyer has already told us about alleged details in two of those documents that were apparently acquired through a Freedom of Information request.

Why might these documents be vitally important to Virk's defense?

Because, if his lawyer is correct, the discussions/correspondence between Mr. Virk and Mr. Chris Trumpy, then a deputy minister and member of the BC Rail Restructuring 'Evaluation Committee' (see flowchart at the top of the post which is from the 'Interim Fairness Advisor's Report -pdf') appeared to be centered around OmniTrax' bid for the Roberts Bank Spur Line.

Now, don't forget that OmniTrax was the company whose lobbyists, Pilothouse and principals, allegedly paid bribes to Mr. Virk and co-accused David Basi.

And don't forget that there have also been accusations that OmniTrax may have been receiving special consideration in a quid pro quo/smoking gun deal for the Spur Line in return for its having previously provided 'competitive' cover for the mainline deal that was won by CN.

Thus, if any measure of this were supported by the documents requested by the defence it would very strongly suggest that Mess'rs Virk and Basi were not acting alone but rather, at least in part, under the direction of the government.

Which was then, and still is now, despite the defection of many of the Ministers involved at the time, the government of Mr. Gordon Campbell.

So, what has that government now decided with respect to, as Mr. Campbell called it last May, the unfettered and independent treatment, of the documents?

Why, of course, just like Mr. Nixon's government from long ago, Mr. Campbell's government has decided to stonewall while claiming....:

Government lawyer George Copley has said the documents can't be released because they involve legal and financial advice on B.C. Rail and are therefore protected by solicitor-client privilege.


In other words, like Mr. Nixon's before it, Mr. Campbell's government appears to have decided that the Railgate Tapes/Documents will not be released.

All of which has us wondering if any of Lotusland's proJourno Pundits will soon be asking which is worse..........

.......The Crime or the Cover-Up?
_____
Of course, those, like Bill Tieleman, who have been following things closely have noted that Campbell government lawyer Mr. Copley also invoked the exchange between the Premier and Ms. James in the Ledge as a 'justification' for the government's present stonewalling action. This is nothing sort of bizarre, and Mary (see bottom of post) has exposed it for what it is - a ridiculous circular argument (which is the polite, non-Doctor 'J', way of putting it).

Some (OK, maybe one or two) readers may be wondering why we resorted to taking the flowchart from the 'interim' fairness advisor's report that was commissioned by the government after issues of leaks arose way, way, way back in early 2003 (ie. back when CP Rail pulled out of the bidding screaming that the fix was in which occurred before the Ledge Raids that led to the Basi/Virk/Basi charges). Well, it appears that the gov.bc.ca link to the final report (which includes the tag 'prem' within it) is dead. Coincidence?

Oh, and one last, pseudoFeltian point - someone who goes by the moniker 'deep throat' first posted up the Campbell/ James exchange quoted by Mr. Copley today over at Mr. T's place last Monday. A second coincidence?

Interesting Trivia Update: As our good friend Big Audible Dyn-O-Mite told us off-line ......Alexander Butterfield actually guessed that Mark Felt was Woodstein's real life 'Deep Throat'. Who was Butterfield? He was the Nixonian deputy assistant who originally told the world that the Watergate tapes actually existed.

Many, many thanks for this, RossK. - BC Mary.

P.S. Is it true that Premier Campbell has returned from China but has already gone to Hawaii for his annual Christmas va ... va ... vacation?

Comments:
After the medias treatment of the Vrk Basi raid, you still believe that the media is unprejudiced or not for sale!!!!!!!!!!!!!! Like everyone else they are bought and sold by the corporations.

[A]bout 30 years ago a group of chirorpactors successfully sued the American Medical Association and 18 other co-defendants - the who's who of medicine. They were convicted of a conspiracy to discredit and destroy chiropractic. At two appeals, the original decision was upheld.

In the trial it came out that there was a full time group of people who where hired to discredit and destroy chiropractic.

This was a major event - the second largest health group suing the largest. Guess how much was reported - one small entry in the San Francisco Examiner on page 38. Nothing mentioned anywhere else in any major newspaper.

A patient died ten days after receiving a chiropractic adjustment. There were headlines in the Financial Post as large as the ones seen from the Gulf war. The headlines read Chiropractic Adjustment Kills Patient. This was long before there was even an inquest.

It is not hard to figger. I could give you many examples but this one will suffice.

I believe that if bribery does not work, then threats are next. This means that everyone is vulnerable even if they are not dishonest.

Not to mention a purposely ham-handed burglary...there are many ways to deliver a message.

What's happening in court is just a slightly more civilized way of saying the same thing.

The complete absence (correct me if I'm wrong Mary) of any coverage of what should he headlined 'Copley's cop-out: Campbell hides behind solicitor client privilege' in the Can West 'papers' today says volumes....

That's CanWest. They think nobody will notice when they refuse to mention a word about a colleague's violent intimidation while he's in Supreme Court doing what they should also be doing: reporting on the Basi-Virk proceedings.

So who ya gonna believe: Bill Tieleman or CanWest. Something BIG happened in Supreme Court on Friday, says Bill. Nothing happened noplace on Friday, say CanWest. "Just move along, folks."

Sometimes CanWest sends reporters to do stories and then they decide it isn't news so refuse to publish the stories. So were the reporters just providing Head Office with private updates?

The Managing Editor actually promises us (in writing) a big Basi-Virk story "in a few days" and thinks we won't notice that it never happens.

Meantime, the stuff they think is newz ... wow.

So we rely upon Bill Tieleman more than ever. Camille Bains of CP is very good. Our Commenters are bringing in the clues. And RossK is coming down the track like gangbusters.

But right now, I have a headache from trying to find the report RossK needs ... and it seems to have been scrubbed from the Internet, from government lists ... who ya gonna believe?

It's public information: the FINAL REPORT by Charles Rivers Associates on the fairness of the Campbell government's handling of the BC Rail negotiations.

I can find where Ms Reid "committed to issue a bi-weekly bulletin to keep BC up to date on the BC Rail revitalization process." - July 30, 2003.

I can even find BC Rail Partnership Update #5, which promises that "When the government announces the selection of a final proponent for negotiations, the independent fairness adviser will publicly release a report that provides opinion on whether:

* competitive bidding processes were undertaken and overseen by the Evaluation Committee

* the Province of British Columbia as shareholder receives fair and reasonable value for entering into a partnership to revitalize British Columbia Railway." 2003TRAN0059-000883, Oct. 10, 2003.

But this headache comes from running down endless rabbit-trails trying to find the actual FINAL REPORT. Even the government site is shut down. "Go play on the freeway," it seems to say.

You don't suppose that Charles Rivers FINAL REPORT was in plain sight for 2 or 3 years before somebody recalled it after having the bright idea of placing it under Solicitor-Client privilege protection?

Because really, Charles Rivers claim to be sorta more like, well, accountants, aren't they?

Who ya gonna believe?

Sorry to have given you a headache Mary - thought my google-skills had evaporated.

Clearly, something does seem to be amiss with that particular document.

Perhaps we should file a FOI request?

I was just thinking, some of the details of the story of the chiropractors suing the AMA, are not exact.

The story is true but some of the details may or may not be true.

If you wish more accurate details go to http://en.wikipedia.org/wiki/Wilk_v._American_Medical_Association .

There is a quite a good article re this.