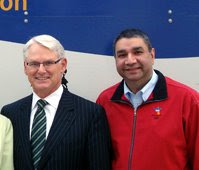 Police investigated role of BC Liberal MLA Dave Hayer in attempt to have ICBC collections forgiven, defence alleges in BC Supreme Court

Michael Bolton, representing David Basi, former aide to ex-Finance Minister Gary Collins, told Justice Elizabeth Bennett that new disclosure of documents to the defence revealed that Hayer was investigated on allegations that he and Basi were attempting to have “assessments or collections” of money owed to the Insurance Corporation of B.C....

Bill also has a good article on The Tyee