Can anyone do these two jobs at once: Deputy Chief of Staff and Executive Assistant? 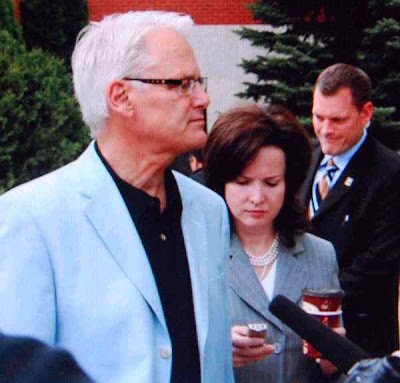 When Gordon Campbell went to Eurpe to "explore new approaches to improve" how medical services are delivered in B.C., he took his brother-in-law, the B.C. Health Minister, his Chief of Staff, and his Deputy Chief of Staff - Lara Dauphinee - with him. When Sean Holman noted this in his Public Eye Online, there were questions. One question was:


Why do both Chief of Staff Martyn Brown and Lara Dauphinee, deputy chief of staff and executive assistant, have to accompany the Premier?


And it made me think ... if the Deputy Chief of Staff was in Europe ... but wait ... wouldn't that be the premier's Executive Assistant who was with him? See her carrying munchies? Working a recorder? That's the kind of thing an EA does.

Which means that there are frequent periods in Victoria and in Vancouver when there's no Deputy Chief of Staff doing the things Gordo described in the Legislature on May 28, 2007.

He said she, as Deputy Chief of Staff, is responsible for

She's responsible for the recruitment and hiring of administrative coordinators and support staff in the Victoria minister's office.

She's responsible for operations of the Premier's Vancouver and Victoria offices, including recruitment, hiring and ongoing review of administrative coordinators and support staff. [This probably is where her recommendation on behalf of hiring Bobby Virk came from. - BC Mary.]

She is responsible for the Premier's tour and special events.

She is the lead liaison with the protection detail.

She organizes the Premier's travel and meetings and events, and she ensures that follow-up takes place.


So... that sounds like the Deputy Chief of Staff is the job-function connected to traveling with Gordo, organizing his tour, arranging for his protection detail, his special events, his meetings?

Maybe being a Deputy Chief of Staff means that she's a bigger, more highly paid Executive Assistant? If so, why does she have both titles? Isn't it fair to ask, then, if she is being paid separately, for two positions?

I'm told that the big guy having a secret chuckle in the background of this photo is one of Gordo's bodyguards. And that was in Saskatchewan. Not in Vancouver. Not during an election campaign. So ...

About that "gun scare" story last evening ... and Gordo's bodyguards who were right there in the Fairmont Waterfront Hotel yelling at him to hide ... a couple more questions occurred to me. After reading the Vancouver Sun story yesterday, I wrote to the author as follows:

From: BC Mary
To: Cernetig, Miro (Vancouver Sun)
Sent: Mon May 04
Subject: Premier evacuated from hotel during gun scare (in all 3 BC dailies)

This prompts a question.

On April 15, there was a rather touching incident in West Vancouver when a BC Rail locomotive stopped at an intersection and the BCR trainman of 33 years climbed down, and walked across to where an NDP campaign van was parked, Carole James inside.

CTV caught the moment when the big man went to the door of the van and called "I would like to see Carole James!"

As the CTV voice-over said, "This was unexpected. It could go either way."

Then James came down the steps slowly, looking very frightened. And she surely was vulnerable, there on the side of the road.

"I just wanted to wish you Good Luck," said the man, and offered his hand.

James continued to look frightened even as they shook hands and chatted about BC Rail.


I wondered then ... and after reading your report about Campbell's bodyguards ... I wondered again: Does Carole James have any protection in these troubled times?

I understand Lara Dauphinee is in charge of protection for the premier. So is it a matter of choice? Who provides it?

I'd appreciate knowing. Thanks, if you can tell me.

To which Miro Cernetig kindly replied:

As Campbell went into the dining room, his press secretary, Bridgitte Anderson, was left at the table with the columnist.

Sirens began to wail. Police cars sped by the Fairmont Waterfront Hotel and police officers began to run up and down the street.

It gets worse. Vancouver Sun later has this front-page headline:

Premier Campbell rushed away from armed woman in downtown Vancouver

This electrifying news bulletin was accompanied by an audio clip. Have a listen, just for laughs. It could've been recorded in the back kitchen of any burger joint in the world ... whack, clash, thump, clang! ... not an intelligible word or sound on it. I mean, what is this, April 1 ... the PAB gone nuts ... what? - BC Mary.

Updated May 5, 11:00 PM: it seems the 3 BC CanWest dailies began to have 2nd thoughts and the headlines changed, the stories changed, and then they disappeared.

Comments:
Aside from the Keystone Cops-like quality of the situation, and the notion that it was somehow staged to portray Campbell in some kind of vote-getting sympathetic light - ?? - when I saw this:

A woman with a gun (are they sure?) ran along the sidewalk in front of the Fairmont Waterfront Hotel ... she got into a taxi and drove away, for cryin' out loud! ... I just had to ask: that wasn't Nancy Campbell by any chance was it? ;-)

Get up, get up,” Campbell’s RCMP bodyguard yelled, minutes after the premier had began a sit-down interview with Vancouver Sun columnist Miro Cernetig in the hotel’s restaurant after 4:30 p.m. The premier looked up, surprised. His bodyguard crouched low and moved toward his table.

When Campbell only glanced around the empty room, the constable spoke louder and pointed to an empty private dining room metres away.

The premier hesitated a few more seconds. “There’s a man with a gun,” said the bodyguard. That got his attention.

There's a lot of indecision here on the part of the premier. The man seems incapable of making decisions under duress. And now today after leaving two people behind the spin is there was a lot of heroics here. I do not for one minute believe that this went down any different than how Milo reported it.

where's that photo Koot had up?!

It's beginning to seem like the photos and the silences tell the story.

I had exactly the same reaction to the "Gun Scare" story - I wondered if it was played up to deflect attention from the debate. But it came across as a piece of total buffoonery. Now I'm left with this indelible impression of Mr. Campbell foolishly cowering behind armed guards from an episode that probably didn't even involve him. I mean, we'd all like to fancy ourselves as the centre of the universe around which everything else revolves, but come on!

"Every man for himself and to hell with the reporter and the press secretary".......sounds like Gordo had "deer in the headlights" and I know that feeling myself when faced with danger combined with confusion. But abandoning others to the same danger? Not very leader-like....

The bodyguard must have been non-plussed about Campbell's stunned-cow behaviour. "Come here, dummy!!" etc....must be like dragging around a shy, fearful little boy.....

An interesting statistic might be, if we could ever figure it out, how many back doors in the province the Premier has used, as opposed to front ones....

I find it rather amusing that his press secretary was just left at the table! With Miro!

My, one would think that in a situation where such a grave risk was perceived in the moment, the natural reaction of any man( or woman) would be to grab her, and yank Miro and take them along too... saving them all.

Gee,NOW I see why his staff are paid so much.

BC rail new owners, CN Rail, set a a record high in 2008 hauling coal from mine pit to port. It doesn't say that in the Vancouver Sun, but the coal had to be transported somehow other than mule train.

B.C.'s miners ride high coal prices to record 2008 profitsYou'd think if it there wasn't a provincial election going on, Premier Gordon Campbell would be claiming the record profits were his doing, by having sold BC Rail, correction, given BC Rail to CN Rail for a song. But with ballots being counted next week it appears the Premier doesn's want the public to know that BC rail as a Crown corporation would have been reaping huge profits to which he would have tapped into for funding shortfalls that would have helped balance his budget.....

On a lighter note:

What is the Premier and health officials doing about the swine flu when we go to the voting booths, pencils in hand?

Sanitation at the polls

Ian Hanomansing had a good three minutes with the premier last night,( can't seem to find the video though) where Gordo failed miserably to answer his question the first time, Ian expressed disbelief when he rattled off how great bc is and was, and blah blah blah, and pushed it again, but Gordo still evaded. He asked Gordon, if looking back at his time in office now, were there any mistakes, or something he would have done differently?

But,it got even better when he was told what Christy Clark said about him in the Globe and Mail.... I thought he was going to bite off and swallow his tongue.

Her quote?
" It looked like he was really controlling himself because he knows he sounds better when he's calm than when he's angry....."

Well said, Christy, which is only part of why we dont like him.

When you ya wrap your mind around the two both got big, BIG SALARY INCREASES AT THE TAXPAYERS' EXPENSE that Premier Gordon and his cozy associate, Lara - & I mean COZY,. . . .it boggles to think of the tidy 'NEST EGG' they would have together.

Is one of the reasons Lara gets such a hefty golden $$$$$ salary (the highest in the Campbell Govt.) perhaps a way to 'launder' $$$$ into their future together?