The Fire and the Fence

cauldron: a large round container for cooking in, usually supported over a fire. 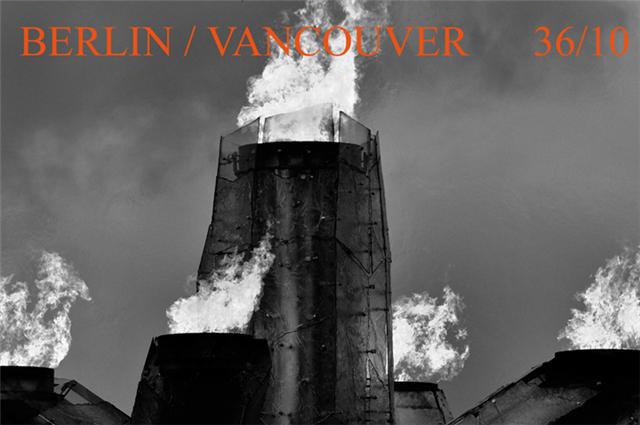 In my view, this photograph evokes the police state into which our beautiful province is sliding. Some others have tried to say it in other ways ...

The so-called muzzle clause [ in Cultural Olympiad performers' contracts, which forbids artists from making any negative comments about the Games]  has recently been the subject of heavy criticism ...

On the eve of the Games, Raymond T. Grant, artistic director of Salt Lake City's 2002 Olympic Winter Games Arts Festival, sent an open letter to the Vancouver Olympic Committee urging it to drop the controversial clause from the contracts, which he deemed "both dangerous and unnecessary."

The clause states, "The artist shall at all times refrain from making any negative or derogatory remarks respecting VANOC (the organizing committee), the 2010 Olympic and Paralympic Games, the Olympic movement generally, Bell and/or other sponsors associated with VANOC ..."

Comments:
I don't know about anyone else, but on so many levels this Olympic torch/flame is so bad.

In the age of environmental meltdown and dwindling petroleum sources, why was it necessary to have not one, but FIVE humongous roaring cauldrons spewing CO2 and whatever pollutants? Was VANOC's only creative thought "bigger is better"??

And talk about ugly. It resembles strewn construction site garbage. We could have had something graceful and strong, not ugly, belching and clumsy. Are we in the Soviet Union yet Toto?

This is more like an homage to the oil industry (maybe in support of the Tar Sands?) with the pipelines being rammed down our throats now.

Or here's another thought -- maybe it's an homage to all the homeless people, and they will be invited to warm themselves alongside ... nah, never mind.

What a sick, sad spectacle it is to see people clamour to get a photo of this ugly piece of junk. And, what perfect irony that it's behind a chain link fence and concrete barriers (though now it's new and improved with a jail guard-style peep-hole for photo-ops).

It's a burning shame.

What would be wrong with a simple little flame with class.

I have found it very difficult Mary to write anything Olympics related, I love sports and competition but the continual overkill of every medal winner we have is too much.

All are winners are paraded around like a trophy,lastly Mary ...

The two phrases that are driving me nuts are...

I haven't wanted to write about the Olympics, either ... not until The Great Satan sent me this photo.

The photo seems to say everything that's troubling about our poor Province trying to entertain the world.

I thought that when 10,000 journalists came to Vancouver from around the world, that they would SEE the local background ...

they would dig into the local news ...

and begin to understand that this is a province under duress ... that it gave away the biggest regional railway in the country and then spent the $1Billion on police for the Olympic Games ...

that B.C. has never needed, or wanted, and can't afford $1Billion worth of police protection for anything, ever before.

I thought that the Internationals would understand that something has seriously, dangerously shifted out of place, unbalanced.

No, the internationals seem to have caught the CanWest disease, too.
.

In 1936 a lot of Canadians thought Hitler had the right idea, including William Lyon MacKenzie-King our great "Liberal" Prime Minister.

King actually went to visit Adolf Hitler and called him a great chap.

I bet if Gordo was around back then, he would have raced over along with John Furlong to Nazi Germany for photo-op with Herr Hitler too.

Thank you for that comment ... also thanks for the great photo.

I must defend Wm Lyon Mackenzie King who dragged this nation from an agricultural-peasant status into the world's 3rd greatest industrial power while fighting WWII and making sure Canadian veterans were treated well on their return home.

Almost every world leader admired the way, in early times, it looked as if Hitler had created full employment, a happy population, had the German trains running on time, and kept German trade union workers down.

One by one, except for King Edward VIII, Mussolini, Franco, and Hirohito ... world leaders began to see through the charade (like the bizarre use of National Socialist meaning the opposite).

I keep hoping that the International Press corps will see through the charade going on in British Columbia too.
.

Can one of your fine folks please produce an online citation about the open letter about the Cultural Olympiad so I can add it to the Wikipedia article(s)?

Lately there have been a series of complaints ("innocent but organized) about how heavy the "negative" coverage on the article is, and "why isn't there more positive information", also an attempt to move controversial materials to a separate subarticle without proper mention on the main article...Wikipedia is constantly under attack from "information moles"; some of them "cognitive infiltrators" who hang around just so they can intervene on stuff like this, pretending innocence, others perhaps people influenced by the bigger media machine simply responding to the condition....someone even tried to change a section title "Contrervsies and concerns" to "Controversies and challenges", in the course of deleting two "negative" subsections....it's so blatant sometimes - p.r. firm activity - it makes me retch, but I can't accuse them in wiki-public; against wikiquette y'see...

But this ranks as bona fide "controversy" and interestingly is about the cultural programming that some have pointed to as the "positive material" the article should expand to include (as indeed it should, but not with "positive" as the agenda, or "negative"...."balance" is not their goal, it's dilution....

I'm not sure what this means, but I don't think it's good news.

Hugh: not surprising and yes, there's more than meets the eye with news items like that.....

This era in the history of BC will, I fear, only be possible to write post mortem, and will require investigative journalism/analysis from outside, independent scholars (above and beyond the excellent work done by Laila and Kevin and Sean and Bill etc - and Mary).

the privatization of public assets and public services into US hands is proceeding so fast that I'll return to my old mantra that coopting the statehood movement in the interests of full disclosure and democratic reform seems the only sane solution. Why be a US possession when you can, instead, be a state?

The Morgan Stanley thing needs a New York investigative reporter to come onside and do the digging that's only possible by someone deeply familiar with Wall Street and its ways....

can anyone please tell me if the crown is seeking a jail sentence for Basi if found guilty?

"Can anyone please tell me if Just Askin is an idiot provocateur"??

I totally agree on the Olympic cauldron. It is clunky, ugly and wastefull. How on earth did this get chosen?

It represents the great divide between our provincial leaders and their fleas (Vanoc) and the rest of us.

Can anyone please tell me if Skookum is okay with criminals walking free just so long as they can point out and take down someone else who also may be up to np good?

Skooks, in your rule book, all drunk drivers who can point out another drunk driver gets away with driving drunk?

if BVB are guilty as charged, irrespective of who else gets dragged under, or not, should they walk?

Somehow, Just Askin, you're still managing to focus this on BVB, not on those who hired them and gave them their marching orders.

I'm very much to criminals walking free because they owned the police and courts and sic'd them on their own underlings, instead of resigning in disgrace as a good parliamentarian would have and should have done.

You're equivocating by putting a circumstance in my mouth that's not part of the way things are done in BC. This is not Napoleonic law, where people are imprisoned until found innocent, that's not the way things work here. You might like it to be, but you'd also like it if this case were only about BVB huh? It's about a lot more, as anyone with half a wit knows....

I"m also against professional liars and dissemblers walking the streets as if they had real souls, and haunting the internet on the public payroll....

Please avoid assigning guilt or innocence about a trial which has not yet been heard in court.

Also, please select a User Name next time you comment.
.

sorry bc mary, but many here are assigning much GUILT on those who arnt even charged!! How is that fair?

Just wondering if all the PABbots that have taken time to write their sh*t disturbing comments on the blog, are getting a bonus for every comment from their ring master?

That "ministry" is about the only one I can think of that will have me rejoicing at the thought that hundreds are about to lose their jobs.

PTP, I"m talking about charges arising from evidence we know about from the pre-trial hearings, and from admissions and news copy concerning them. I'm talking about people who need to be investigated, and in the weight of overwhelming evidence, seem pretty likely to be charged - IF the RCMP and the courts were properly impartial.

You and your other semi-anonymous friends all seem to want to sandbag Basi, Virk and Basi and them only. Isn't it you and your other trolls who want to condemn them as guilty, so we can all get on with our lives and forget that they were acting, as they claim, on the Premier's orders.

Leah, unfortunately the Ministry of Lies, otherwise known as PAB is the last "ministry" likely to face staffing cuts. The Gordo Crime Syndicate would gladly close schools and hospitals to pay for more spin and mis-information.

And by the way asshole (otherwise known as Just Asskissing), underlings rolling over so their bosses can be prosecuted is common in our justice system and generally considered a practical use of law enforcement, court and penal resources. The example of a drunk driver turning in another drunk driver in return for dropped charges is an absurd example. Think more in terms of a nickel bag street dealer, turning in his supplier and importer or menial government aides turning in the criminal elected officials who issued their marching orders.

Dave Basi and Bobby Virk, though high in the bureaucracy, never had the power to effect the IMPORTANT decisions to be worth bribing - they are shiney objects, scapegoats and distractions from the genuine criminals and actual crimes that as Skookum points out above haven't even been addressed by the laying of charges.

I have to admit, I get a chuckle everytime I see a Canadian Pacific ad during the OweLimpics. CP the company that withdrew from the phoney auction of BC Rail because they could tell it was RIGGED. I wonder how come that Texas based RR, CN didn't get to be the "official" OweLimpic sponsor.

Koot...with the financial contributions CN has given the liberals, one would have thought they would have been a shoo in. Or just maybe, they all realize it was a better idea to keep them out of the picture right now...they're a reminder of BC Rail.

Something the political animals in power in BC would really like us to forget.