So, people aren't interested in the BC Rail Corruption Trial, eh?

.
BC Mary comment: Kootcoot's latest posting at House of Infamy includes the following quote, and a graph showing the number of visitors to his blog (House of Infamy) and mine (The Legislature Raids) for the 3 days the BC Rail Corruption Trial has been running:

... The traffic statistics for blogs like the Legislature Raids and here at the House of Infamy tend to indicate that there are more and more people who aren't only interested in this trial, but interested in getting beyond the same old spin of the same old PABlum Brigade and their allies of the formerly Assperson Press and Media Empire. 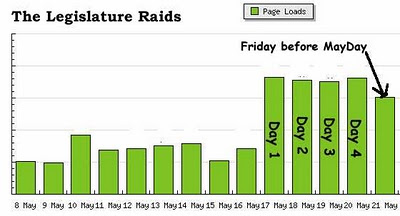 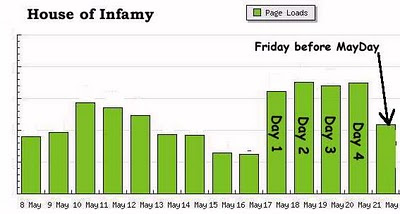 Day 1 - Trial scheduled to begin, but the jury is sent out and ... etc. Read more of  Koot's article that goes with the graphs, at

and by the way, this happens to be No. 1,500 of the postings gathered on The Legislature Raids since we began, back in 2006, when the first announcement was made that the trial of Basi, Virk, Basi would start in June, 2006.

Well, of course, it didn't. Old cyber-friends will remember Koot and BC Mary as well as "Coyote", G West, Lynx, and others who were frequent contributors to the comment threads on The Tyee. At that first Basi-Virk postponement, we all realized that we might never know what had happened to BC Rail if we didn't do something ourselves.  Our blog ventures developed all together, right then and there. I love it that we've grown into a larger collegial, cordial,co-operative circle of bloggers  ever since.

So this has been a wonderful week for us, -- May 2010 -- when the BC Rail Corruption Trial actually did begin. It's been impossible to describe how welcome Kevin McCullough's decisive, clear-minded cross-examination sounded to us, after the long, dark wait outside the stonewalling. Hallelujah!

Comments:
From Bill T's latest Post on his blog he has given us the "document" that was shown to Martyn Brown regarding the fact that Mike McDonald was in the Premier's Office listed as Director of Outreach and Special Projects

Which means to me that all of them were party to the phone calls coming in to Mike McDonald...... including Lara Dauphinee, Executive Assistant to the Premier.

By all means Premier Gordon Campbell/Martyn Brown, give them titles, but can you just imagine what was happening when 250 387-1715 went Riiiinnnnnnggg!!! and not only does the Director of Outreach and Special Projects picks up the phone, but anyone else who is available in the office and then, recognizing the voice they say: "Hello Dave....., who do you want to talk to?"

Which probably goes a long way to explain why the taxpayer was paying for TWO phones for each employee in the Premier's Office - the Land line and the Cell Phone line.

The Source of the document that McCullough showed to Martyn Brown in Courtroom 54 is still available on the internet at:

Oh, if only Irene Chanin was still being paid her six figure number. Why, you may be asking yourself. Its simple. Martyn Brown possibly wouldn't be working for Gordon Campbell nor would Andy Orr (who has since left to join Ascent Public Affairs Inc.)

Backgrounder provided by the NDP May 8,2002 website, source below:

"Irene Chanin was hired on a three-year contract last year to reorganize the communications arm of government under the direct supervision of the premier's office. It was learned recently that Chanin had been stripped of her responsibilities and shuffled to a new position created especially for her at the BC Buildings Corporation. In the Legislature MacPhail asked the premier if, in the interim, Ms. Chanin collected her salary while waiting at home for a new job. At first the premier denied the story. He later admitted it was true.
"If the premier thought Ms. Chanin was not working out, he should have thanked her for her efforts and terminated her contract," said MacPhail. "Instead, he sent her home on full salary while a new position was found, hoping the whole matter could be swept under the rug."
Chanin was hired by the premier to "depoliticize" government communications.

Since her firing, Andy Orr and Martyn Brown, the premier's chief political aides, have assumed her responsibilities and are in the process of hiring a high-priced advertising firm to provide them with assistance.


The above implies that the BC NDP saw Martyn Brown then, as the Premier's chief political aide ........ but at the trial there is a different side to Mr. Brown:

""I've worked in this business for 22 years; I've served under five leaders, three premiers. I'm told I'm the longest-serving chief of staff in the country. It's just not something I would do. It's rare in political life that any inappropriate conduct isn't outed," Brown said."

Mr. Brown appears to want to come across as a self-effacing servant of the government, however; in reality I believe he's master of the government to the degree that nothing is done without his knowledge, permission or direction. The following are excerpts of an article by Jody Paterson of the Times Colonist (Victoria), Sunday, December 2, 2001:

..."In 1995 when the Vancouver Sun named Brown "one of the new power brokers,'' the party was riding high in the polls. The press took to describing him alternately as Weisgerber's Svengali, spin doctor, mastermind and hidden puppet-master, words that are still bandied about today."

..."He's credited with creating the new image for Campbell that got him elected, and is said to be "incredibly tight'' with the premier."

..." His blessing is sought before Campbell makes a move, and he's widely credited by insiders for the Liberal win this spring."

..."Weisgerber says Brown is the consummate right-hand-man for a political leader, on top of every detail and a "straight shooter'' intensely focused on the boss's best interests."

..."Brown's hand is said to be all over Campbell's New Era document, his influence felt in every corner of government. He's a driving force behind the contentious treaty referendum. His blessing is sought before Campbell makes a move, and he's widely credited by insiders for the Liberal win this spring.

..."He's the guy who bosses British Columbians around," says Nisga'a negotiator and elder Joe Gosnell, who has tangled with Brown on treaty issues. "He's a very powerful man for someone who has never been elected."

..."Yet Brown keeps a low profile. Outside political circles, his name sparks few glimmers of recognition. He clearly likes it that way; he refused all comment for this article."

Now I don't mean this sound unkind, it's not meant that way for certain. I truly don't think Gordon Campbell has what it takes to do what has been done to this Province on his own - he's not that smart. Of the two, I think Martyn Brown is tacitly the Premier of BC, Gordon Campbell is more the messenger, and enforcer.

That piece of wisdom was so STUPID ...

and if it was a joke, it was so not funny,

The links have always been there.
.

Is someone using my name here?

I wrote nothing to you on this topic.

Which means your request that your contributors use a name is not foolproof.

Anyone can use a Name, and someone has!

Maybe, it was a PAB.

Has NVG and Leah written something here that has ticked somebody off?

The phone directory that was entered as evidence in the BC Rail Trial is dated: January 07, 2002


Hmmmmm, a unique number, like Andy Orr's, had me thinking "What would happen if I did a search via Google with that special number" and this popped up with a little reminder. "This list is maintained by the Public Affairs Bureau" - Sept 12, 2005

All told, the Premier's inner office staff more than doubled in size of manpower after the Raid on the Legislature and then I came across this little nugget dated June 26 2002 as an "Explanatory Note - Government communications restructuring
– The Need for Change"

SNIP and SKIP to:

The new communications structure is aimed at improving communications across government at a greatly reduced cost to taxpayers. This year's budget for the Public Affairs Bureau is $34.5 million, a reduction of $4.8 million. The further reductions we are making to staff through this change will result in additional savings of up to $4 million annually.

The government recognizes that it must do a better job of giving people the facts and information they want and need to properly understand the changes their elected officials are making in the public interest. By the same token, the government is intent on ensuring that all misinformation is immediately corrected.


The new structure is aimed at communicating more efficiently and effectively through a shared service approach that fosters greater flexibility, confidence, competence, and cost effectiveness at every level."

According to this Summary, the PAB annual budget should be reduced to ZERO by next year.... yeah right....

Thanks for your two comments. Thanks for letting me know that it wasn't you.
.

"Which means your request that your contributors use a name is not foolproof.

Anyone can use a Name, and someone has!"

Mary's request for anon-o-mice to use names is merely an attempt to foster dialogue, and help her and other commenters know if they are talking to the same person. Obviously anyone can pose as anyone, and some people pose as many different people to falsely promote a number of people sharing the same view.

Only when the name is in Blue (like BC Mary's or mine, or NVG above) is there ANY reason to lend credence to the person actually being the same person. This indicates the person has registered a Google Account and unless someone has hacked their password or otherwise hacked their account - it is either that person or someone using their ID with their permission.

Of course if someone wants to pretend to be part of a crowd, they can always open numerous Google Accounts and pretend to be a constituency - kinda like the phony phone-in callers on CKNW ala "Bob from Burnaby."

I (and probably Mary) don't really care WHO you are, however the important thing is that you make comments that are cogent and based in reality. Spewing PABlum Brigade talking points and distributing lies, red herrings, non-sequiturs and personal attacks is not effective here, and those comments are only published (when they are) for comic relief!

"Hi, I'm Pete from PAB, and here's what they told me to say to you today ..." With a return address.

Obviously that isn't likely to happen.

The part that truly bugs me, though, is that BC Taxpayers must foot the Public Affairs Bureau bill (approx. $34 million a year) to be harrassed; this being only one of the ways.

Strange world is developing, if we don't find ways to make them stop and think of the consequences.
.