The Real urin Journalists Weigh In 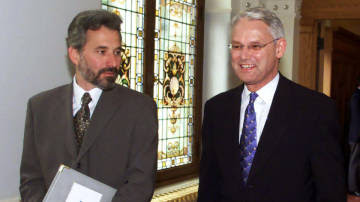 One guy without a memory and another without a conscience!

Now that the BC Rail Corruption Trial is actually underway the "real" journalists, the useless stenographers who should be proud to be on the same page as a Citizen from Courtroom 54 and ashamed to cash their pay cheques, even publish some observations from time to time. Well, at least when Lucinda Chodan, Kirk LaPointe or other lightweights deem their scribblings "newsworthy."

Rod Mickleburgh of the Globe and Mail in Hiring of Kinsella was bad optics writes that:


Premier Gordon Campbell’s chief of staff said Tuesday he could think of no good reason why Patrick Kinsella was hired as a well-paid consultant by BC Rail just four months after Mr. Kinsella co-chaired the Liberals’ successful election campaign in 2001.

Martyn Brown, testifying at the political corruption trial of former ministerial aides David Basi and Bob Virk, said he did not learn of Mr. Kinsella’s BC Rail hiring until the spring of 2004.

“I expressed surprise … why would they hire him?” Mr. Brown told defence lawyer Michael Bolton.

Nor was the decision good optics, coming so soon after the election, Mr. Brown said.

If he had known about it at the time of Mr. Kinsella’s hiring, he would have asked questions, the Premier’s top political operative said.

“I would have asked ‘why?’ because I don’t know what value he would bring [to BC Rail … and] the optics are not good.

Then the dean of the Panel in Charge of denying real journalists the right to use a recording device in the courtroom (which could inadvertently lead to the truth being published, we can only assume) Keith Fraser displays his expertise in
Basi played role in handling Gordon Campbell's drunk-driving charge

During earlier cross-examination, Brown praised the work of accused David Basi in rallying support for the government, including the period after the 2003 arrest of the premier for impaired driving in Hawaii.

Bolton noted his client’s role of arranging for government supporters to call in to radio talk shows to ask “softball questions” of the premier.

He said Basi was “particularly effective” at those activities, which have been characterized as political “dirty tricks” by some.

Keith Fraser's surprisingly "hard-hitting" coverage today is even accompanied with a collage of Gordo's famous Maui mugshot photos. It's enough to make one wonder if some of these guys are trying to remember what a journalist is/was supposed to be and do, just because employment opportunities aren't that attractive doing P.R. work for unemployed and or imprisoned former politicians. I wouldn't think that being a Campbell lapdog or employee of the Public Affairs Bureau is a really comfortable and secure career these days.

Comments:
Now we hear from Bill Teileman that Martyne(I can't recall) says he didn't know that lekstrom left the Liberal caucus and the party to sit as an independent. That makes him about the only person in BC that wasn't aware.Wonder if he can remember when payday is or where his office is located?

Naw, some intern pulled that mug shot out of the files and inserted it when the others were napping. The writer probably had nothing to do with the picture selection.

Can anyone reading this tell me t what time they inserted the Basi case #23299 on the court list online.
When I left this morning it was not there and that was at 8:08 AM. But the very next case that was on the list was posted.

Sorry Mary, I think they're both without a conscience - there's no way to defend Campbell and retain one in my opinion.

new starting time for the court due to one juror doing an apprenticeship course for two months. This time shift, 10:00 to 11:15 is only for the rest of June and a week???? into July.

BTW L. Krog and an Assistant have been in Court Room #54 for the past two days.... taking notes on Martyn Brown's performance.

And talking of his performance, and those to follow in his footsteps, think on this. Witness Martyn Brown cannot turn to a Deputy and ask for more information before he responds. He must wrack his brain for an explanation as to whether or not he recognizes a document. His usual response is: "I don't remember"; "I can't recall"; "No, I've never seen that before".

His usual overall answer is that its been almost eight years since the BC Rail raid began, and since then, many other issues have come, and gone.

Further, where WE have been going over the 8,000 pages daily, the BC Liberals have as good as shredded them. They don't go back and look, to refresh their memories because they KNOW that the testimony must be done from MEMORY.


As a test as to how knowledgeable a micro manager Gordon Muir Campbell is you need not look any further than to one of Vaughn Palmer's column keeping in mind that Campbell will have to do this all from his memory banks, and do you really think he has been boning up on this hot little topic called the BC Rail Raid on the Legislature????:


"Premier, adviser do the interesting stuff off camera"

"Opposition leader Carole James led off the annual legislature debate on the budget for the office of the premier Tuesday by putting Gordon Campbell on the defensive over his handling of the Kash Heed fiasco.

The back-and-forth over Heed occupied an hour or so in the main legislature committee room. But that was by time expired on the clock. Campbell's answers occupied much less time, because he spent almost as much time framing them as he did delivering them.

A typical exchange went as follows: James poses question. Campbell enters into lengthy consultations with his deputy minister Allan Seckel, sitting on his left side. Seckel, like a lawyer instructing his client, does most of the talking. Premier occasionally takes notes. Sometimes the consultations extend to a second deputy minister,....."

All the players in Basigate should be liquidated as "enemies of the people".

The Government of British Columbia constitutes a criminal establishment which is aided by its fellow-travelers in the mainstream BC media.

The courts and electoral process are corrupt and have failed the test of free and fair and the Rule Of Law.

You may draw your own conclusions of what form of action is needed to counter this.

In 1982 the people of Poland knew what to do and started on their long struggle to freedom.

Mind you in British Columbia just being Polish and holding a stapler in your right hand will likely get you killed by the RCMP.

just search for the word "indemnity" or 9% or 550 million

(v) The British Columbia Railway Corporation (BCRC) and BCR Properties Ltd. completed a transaction with
Canadian National Railway Company (CN) on July 14, 2004. As a result of the transaction, the province
and BCRC have provided commercial indemnities to CN with respect to the transaction and indemnities
related to income tax attributes of BC Rail at closing. As at March 31, 2009, the maximum present value
(calculated at 9%) of amounts payable under the tax indemnities related to income tax attributes
(excluding any reimbursement of professional fees, tax arrears, interest on taxes payable, if any, on
indemnity payments) is approximately $550 million (2008: $505 million). These indemnities remain in
effect until 90 days after the last date on which a tax assessment or reassessment can be issued in respect of
the income tax attributes. Management believes it is unlikely that the province or BCRC will ultimately
be held liable for any amounts under the commercial and tax indemnities.

Man, talk about corruption and I believe may be bordering on "Treason" or out-right "Treason"!