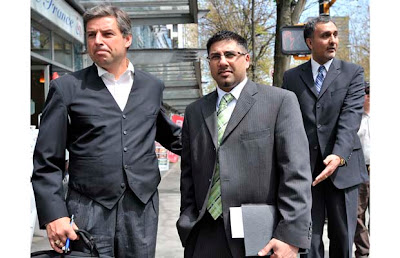 Hanging out at Robson and Smithe -
without a pesky jury.

Another week, another bunch of days with NO evidence presented to the jury. Actually the jury hardly got to attend the proceedings this week, again.   In Another week without evidence given at Basi-Virk trial - jury and witness Martyn Brown dismissed until Monday June 28 at 11:15 a.m., Bill T sez:


The long-delayed Basi-Virk/BC Legislature Raid case has once again gone a week without any evidence presented to the jury.

Associate Chief Justice Anne MacKenzie dismissed both the jury and witness Martyn Brown, Premier Gordon Campbell's Chief of Staff, until Monday June 28 at 11:15 a.m. due to the need to hear legal arguments that cannot be reported because of a publication ban.

Then one of the deans of what constitutes journalism in B.C. these days, Keith Fraser weighed in on the week in the Province. He basically covered the whole week, at least by Canned Waste standards, with 186 words, a few of which were:

Meanwhile, over at the Vancouver Stun, Neal Hall used more words to say pretty much the same - excerpt:

Then you could go over to Ross' joint and get the real story with Are There Mockingbirds In The RailGate Courtroom?


How the heckfire are we not going to wonder if there isn't something not quite straight-up going down during a whole week of publication-banned "legal wrangling" that broke out immediately after a single objection by the prosecution in response a defense question that about another another familial releationship that involves one of the lead RCMP investigators on the case and a high ranking BC Liberal Party apparatchik?

Comments:
Isn't it amazing that both SIDES seem to be trying to screw this case? Is there really any justice in this Province? Stay tuned.

This has been a farce of a pathetic show of injustice in BC. From day one,arrested, 6 1/2 longsuffering years ago.
Now that the trial of the millenium, which started 7 weeks ago and has been delayed 6 times already....will be delayed and delayed, until March 2013.
Because our politcains do use unsavory charactors and methods,'to get the job done'!
Rcmp& Federal authorities have let on going internal corruption go on?!
Throw this case out, and lets stop wasting our minds.
There is no such thing as transparenty or accountability in our governments.We have seen this time and time again, at the expense of tax payers for commissions that produce no new findings. And if there are findings, they are not being followed up on,
and we all go back to sleep.

Crimes are being covered up!
People are not only suffering, but are being used and turned ito submissive interverts.
And the world watches organised crime take over!
EACH MAN FOR HIMSELF.

Don't give up. Don't let the bastards win by default.

The BC Rail Trial is the key to what's gone wrong in British Columbia. We've got the key in our hands. We can either support and push the trial, as best we can, and clean up the province ...

or we can give up and let the various faces of Organized Crime take over and run the province to suit themselves.

Even the United Nations has warned nations against that; the UN says that wherever Organized Crime has been allowed to take power, it's never temporary, it's never for just a little while, it can never be corrected; it means sovereignty is lost forever.

I heard this UN warning only once but I never forgot it. It was issued at about the same time as the police raided the BC Legislature.

Nobody's telling us these stark facts. Ask yourself why.

"Every man for himself, and God against them all"

Exactly Mary. Giving up, going away...is exactly what they want us to do! There is absolutely no doubt in my mind that they're finding the attention of the public at this trial to be nothing but a pain in the neck...it's one thing they really didn't count on. So now, they're going to have to do their dirty work using other methods - but, they run the risk of getting caught in the light. So, let's keep it shining real bright!

the UN says that wherever Organized Crime has been allowed to take power, it's never temporary, it's never for just a little while, it can never be corrected; it means sovereignty is lost forever.

Well, it's tempting to point at Somalia or Congo or Liberia, or in times gone by the Barbary Coast (today's Algeria) and post-Soviet Russia. In a sense, too, the rebel regions of Pakistan and India and other countries, but that's not to say the "legitimate" governments of those countries are any less criminal. The Thai situation comes to mind of course, and the sad history of Cambodia and Burma....

But when I see the old saw "government IS organized crime", a line from historian Colin McEvedy's Historical Atlas of the Middle Ages comes to mind; paraphrase follows.

"The heirs of the Norse conquerers of what duly became called Normandy turned what was effectively an extortion racket into the foundations of central government."

Meaning tax rolls, imprisonment/beating if you didn't pay up, autocratic centralized control rather than autocratic local control etc. Later the same concept became fine-tuned, once established in England, by something called the Magna Carta. The Domesday Book - the tax roll, effectively - was another symptom of gangsterism-laundered-as-legitimate-government.

But I'm sounding like a Kropotkinite and don't mean to....

Democracy conferred from above (the Canadian model) will never be superior to democracy fought for from below (the British and American models).

We don't just need an overhaul and reform. We need a new country, a new concept of government. The trick is taking power away from those who clearly don't deserve it, and abuse it at every turn. And who, when it's pointed out that they are serving foreign interests, loudly condemn those who point it out.

Nothing justifies a liar better than trumped-up outrage at the truth.

Mary, it's good to have you back.

Why, if the UN has known of this, and they should by now, why hasn't there been any intervention? Because this s Canada, and 'we' must respect an on-going ,whats before the court,investigations.?
The thing is, is that, these investigations have been ongoing for over a decade!

And the same goes for covert protection of a witness!
I mean, manufactured, non-consenting, none-the-less wiser, spy!

The trial almost seems to exist in such a way as to be designed to block any deeper investigation.....or any publicity for same.

Maybe the dance is more choreographed and cooperative than we really know.

It's gonna take a court challenge to the publication ban. If the MSM won't do it, the recourse is wilfully violating it.....though there could conceivably be a publication ban put on the contempt charge that would result.

Ain't this a wonderful system we have? Who thought it up again??


does your magnificent Memory Box have the recorded comment of Gen. Montgomery at a critical point in World War Two ...

I can't locate it (I'm not home yet) but it went this way.

Montgomery known to be a stern critic, never handing out compliments lightly. On this occasion, he had been watching critical war maneuvers involving Canadian troops ... assessing their combat readiness.

At the conclusion, he said/wrote:

His recorded comment struck a deep chord with me. Every time I come up against situations such as we're in right now in the BCRail Political Corruption Trial, I think that Monty's conclusion still holds true.

B.t.w., I'd just like to mention how the name of this trial has evolved ... in case anyone is thinking that BC Mary is taking liberties.

We all knew, from Day One, that Case #23299 was about much more than the 3 Accused; but it was then generally known as the Basi-Virk-Basi trial.

It was Madam Justice Bennett who began to call it the BC Rail Trial and I thought that was a much clearer name for it.

Then it was the National Post which began to call it the BC Rail Political Corruption Trial and that seemed even more appropriate.

Just so you know.

It goes to show that things evolve, and, I hope, things eventually can come out to a better understanding if we keep trying.
.


Why, if the UN has known of this, and they should by now, why hasn't there been any intervention?

From the General Assembly you mean? All pointless and unlikely, given how many of them are no less corrupt; might be fun for them to be able to point at Canada as a failure of the First World's notions of democracy, though.

No, the branch of the UN that's needed in this case is the International Court of Justice; not sure if corruption is covered by its jurisdiction but this involves players from more than one country, and also involves "political ownership" of a division of one of those countries by unknown elements, who have perpetrated a criminal scheme of bribery and rigged bidding procxesses....

You'd hope the ICJ has jurisdiction in such matters; they're rather busy with war crimes, though....

I just joined the Beautiful British Columbia Facebook page; it doesn't appear related to the magazine of that name and may have been launched by BC Tourism....but did so with trepidations. I feel like making a wall-post "Beautiful place, awful government" but held my tongue.....the masthead of the page has the usual nauseating "best place on earth" mantra.....but I still joined it, despite my reservations about all the BC-is-best zombies who habituate it....largely a place to post pictures, but in no small part an aspect of the propaganda arm/efforts of the "ain't BC great?" mythos which helps obscure the dire and dirty nature of the political and business sectors.

BTW re the CSIS thing, I'm sure we're all aware of the symmetry of the names of the Public Security Bureau (in China) and the PAB. But has it occurred to anyone else that calling us a "cult" is exactly what the Chinese Communist Party propaganda/p.r. machine has called its own opponents. Information management techniques in the lead-up to the Olympics were no doubt exchanged with Chinese security and propaganda officials, and "creative defamation" is surely one part of that "foreign influence".

not unlike the neo-Christian rhetoric of the pro-American branches of the Canadian right, though....

No, I didn't know that -- about China's propaganda techniques.


at times like this, when the problem of corruption looms larger and larger, I get by

that the key (for us) is BC Rail. I believe that if we unlock the secrets of what happened to BC Rail, we've opened the door on one heck of a lot of other stuff which needs to be cleaned up.
.