BC Rail ... the elephants in their rooms 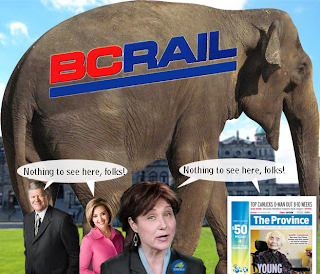 
BC RAIL heading south after changing crews - More video will be on GOOGLE video of it coming into Squamish as ...

We are officially in operational mode, good folks.

Then, take BCR back.

Wallpaper with a powerful message, wouldn't you say?

Public Inquiry into the sale of BC Rail ... NOW.

At present, we have a surplus of Generals, not enough infantry. Are you volunteering? (Say yes.)
.

I don't hear of any of the BC Liberals, overly concerned regarding, Campbell's corrupt sale of the BCR. Christy Clark and De Jong have no qualms about running to replace Campbell, and even he seems unconcerned. All of the Liberals, are just ignoring the subject. Christy Clark, was the only one who said, she had nothing to do with the sale. The trial was nothing but a farce. There is corruption, in every nook and cranny of BC. Nothing is ever done about it. Campbell lied twice, to be re-elected. He got a criminal charge. He is still present doing his dirty tactics. The ministers and mla's continue to cheer him along. How anyone could support a monster like Campbell, boggles me.

Here is another great cartoon.
Check this page if You havent seen it.Gerry Hummel The Common Sense Canadian's cartoonist

Sandcat said...
From Cairo:
It is the first day we have internet. We are still under curfew 3pm - 7 am.

There are 2 military tanks sitting at either end of my street. There are also roadblocks manned by vigilante groups. At present the military appear to be with the people but no-one knows when or how that could change.

The Pro-mubarak protestors currently charging the protestors are police thugs. THE ONLY ONES WHO HAVE ACCESS TO HORSES INSIDE CAIRO (AND WHO KNOW HOW TO CHARGE ON HORSEBACK INTO A CROWD) ARE THE POLICE!!

After the police "disappeared", miraculously, and apparently spontanoeusly, people set up vigilante groups and a roadblock system to police and protect their communities and property. All cars are stopped. If you ask any of them who they are searching for, they will all tell you "undercover police". They know who the thugs,and looters are that are terrorising our neighbourhoods, and who is behind the effort to delegitimise the protest.

I live here in Cairo (im not Egyptian) and want to tell you that today I am so utterly proud of the Egyptians, of their incredible courage and determination, and I feel so totally priveliged to watch the battered and downtrodden Egyptian people stand up and take back their street, their country, their lives and their future.They deserve every ounce of your support for they are fighting in the front lines of a battle THAT YOU WILL BE FIGHTING TOMORROW!
Be with us in your thoughts on Friday. We have reason to beleive that teargas, snipers or worse will be used to break up the demonstrations and create mayhem.
I have no words to describe what I have seen and the incredible shift that is taking place and this is not by any means my first experience in a conflict zone.
This is totally different - this it a profound awakening of humanity and the beginning of an unfolding drama of which we are all part and to which we are intimately linked.