The Rotten State of Law and The Courts In Canada: Madness 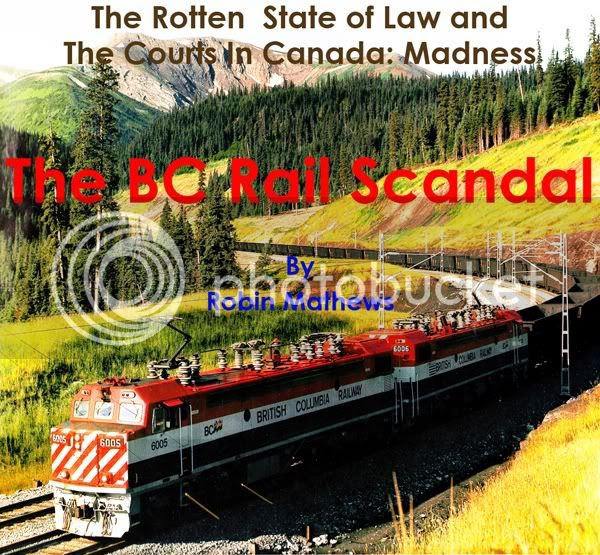 The higher (and other) courts in B.C. are in the news again – this time because of the almost ridiculous state of financial deprivation the Gordon Campbell/Christy Clark government has put the court system into.  Courts are starving.  Judges are in short supply.  Staff is minimal.  Legal Aid support is a disgrace.  Serious cases are being tossed as a result of unacceptable delay.  Justice is being denied ….

Major court commentator (Vancouver Sun) Ian Mulgrew trivializes the situation by using it to insult a lawyer trying to do something to ease the injustice.  Madness.

But madness is afoot in a British Columbia staggering from high-level corruption.  And the madness is incarnated in the Mainstream Press and Media, as Ian Mulgrew shows.

Begin by recognizing a fundamental point. Good, effective (especially) higher courts are a threat to corrupt governments and corporations.  There could be a direct connection between that fact and the starving of the courts in B.C.

The rule of law is under attack in Canada – led by the Stephen Harper government which eludes justice in cases against it and laughs in the face of law, contract, and decency.  Maybe I should say “led by the Stephen Harper government which is following the Gordon Campbell/Christy Clark government that violated the Canadian Charter of Rights and Freedoms in its first years by attempting to smash unions - breaking contract with the hospital employees union and denying teachers fundamental bargaining rights”. Both actions have been overturned by the courts. Christy Clark has yet to restore the rights of teachers, even after a Supreme Court of B.C. order more than a year ago.

How’s that for open contempt for the rule of law by the Christy Clark government? Open, public rejection of a Supreme Court order.

The BC Rail Scandal trial of Dave Basi, Bobby Virk, and Aneal Basi threatened the survival of the Gordon Campbell/Christy Clark government and many of their “cooperating” corporate associates.  The trial was dubiously conducted from the beginning of pre-trial hearings.  It was slammed shut four years later in a way that has scandalized even usually unobserving Canadians.

We’ll look at that – and at the B.C. Attorney General’s attempts to get – (and getting) - “independent” whitewashes of deeply soiled processes involving top government officers.

What do we know about the corrupt state of the Basi, Virk, and Basi trial?

(1) We know material placed on public record was kept from the public, to protect, I believe, wrongly, a number of people.

(2) We know the court operates a “journalist accreditation” process that uses Mainstream Press and Media journalists as court officers, giving them illegitimate judicial power, and guaranteeing they will act in major conflict of interest.

(3) We know that the Special (Crown) Prosecutor, key to the later investigations in the BC Rail Scandal case and to the charges laid against the accused – as well as their prosecution in court – was appointed in clear violation of the legislation governing the appointment of Special Prosecutors.  He was, in short, illegitimately in the court conducting cases arising out of the BC Rail Scandal.

(4) We know the removal (by promotion) and replacement of Madame Justice Elizabeth Bennett in the Basi, Virk, and Basi case involved a motion made by the illegitimate Special Prosecutor presented to Associate Chief Justice Patrick Dohm to have her removed.  And we know that Associate Chief Justice Dohm declared in that process that he had Bennett’s replacement all ready (obviously before the hearing even occurred to present the motion).

6) We know the people in the three positions were informed again formally. [Patrick Dohm had retired as Associate Chief Justice and Anne MacKenzie was raised to that position.]  Once again major judges of the Supreme Court of British Columbia refused to act in any way.  Once again, they did not deny the evidence presented to them.  Associate Chief Justice Anne MacKenzie replaced Elizabeth Bennett as judge on the case, and permitted the illegitimate Special Prosecutor to remain.

(8) We know I wrote to Attorney General Michael de Jong and asked for a reply on the matter from him.  I received no answer.

(9) We know I wrote to the Canadian Judicial Council – final resource in Canada for complaints of judicial misconduct – and reported Associate Chief Justice Anne MacKenzie was guilty of misconduct for allowing the illegitimate Special Prosecutor to act in her courtroom.

(11) We know that Attorney General Michael de Jong (who refused to reply to my correspondence) set up UBC Vice-president Stephen Owen to do a two-month review of the Special Prosecutor process. What I believe was the cover-up move came when Terrence Robertson, looking into allegations of election misconduct in the case of Kash Heed, Liberal candidate, had to resign for an alleged conflict of interest.  Though informed of the William Berardino matter while doing his review, Stephen Owen never made any acknowledgement. He completed his Report  in July 2010, without mentioning the major appointment violation in William Berardino’s case.

Michael de Jong got the whitewash that I believe he sought.

(12) We know that the next Attorney General Barry Penner asked President and Vice-Chancellor of UBC Stephen J. Toope in May of 2011 to review the process for granting indemnities to cover legal costs of B.C. public servants.  I believe Attorney General Penner wanted a whitewash of the astounding payment made to cover the costs of two of the convicted in the Basi, Virk, and Basi case – six million dollars.

The appointment of officers of the University of British Columbia , I insist, to do work for the B.C. government, creates a clear conflict of interest.

Legal theory says that a servant cannot act independently in relation to his or her master, and cannot be believed to do so.  And yet Stephen Owen, UBC Vice-President, and now Stephen J. Toope, President and Vice-Chancellor of UBC, both lawyers, both informed about matters of conflict of interest, both accepted “tasks” from government in which they were to judge “independently” government actions and processes.  Madness. They are a part of the madness.

The two top officers of UBC, I allege, have tainted themselves with the corruption of the Gordon Campbell/Christy Clark government.

In a move to clean himself and to be something other than he is, Stephen J. Toope presents his report as “Professor”, not as President and Vice-Chancellor.  He is, in effect, claiming that he isn’t acting as President and Vice-Chancellor but as a mere, powerless professor.  That pose would stand up in a court of law for about 13 seconds.  It is rubbish.

In his report written, it seems, not from B.C. but from lawyer fantasyland, Toope tells us the Attorney General (in B.C.! ! ) “provides impartial and independent legal advice to government”.

He goes on to acknowledge that his review was brought about in some degree by “public interest in the indemnities granted to Messrs. Basi and Virk in criminal proceedings against them.” (p. 2)  And he admits there is some focus on their case as well as others.

He clears the Ministry of the Attorney General of suspicion, not referring to any other aspect of the astounding “deal” that closed the trial and avoided cross-examination of many people the public suspects of criminal behaviour.  Toope writes:

“Using firmly established common law method, the officials charged with exercising discretion have justified their decisions by drawing out principles present in existing cases and analogizing those principles to new circumstances.  As far as I can tell from the documents to which I had access, the results to date have been principled….” (p.29)

In two sentences, President and Vice-Chancellor Toope white-washes the actions of the Gordon Campbell/Christy Clark government in the matter of the $6 million payment for the costs of Basi and Virk.  Madness.

No wonder the present Attorney General, Shirley Bond, declared herself delighted with the Report!

And then there’s Ian Mulgrew.  He admits the court system is in terrible shape.  He admits angry court staff are beginning to withdraw services to focus on the refusal of the Gordon Campbell/Christy Clark government to do ANYTHING.

And so Ian Mulgrew attacks Kevin McCullough who flies to Vancouver to get the release of jailed people – “doing duty counsel services” - who cannot get to trial.  And he attacks McCullough because he was counsel for Bobby Virk in the BC Rail Scandal trial and - in bargaining with Special Prosecutor (?) William Berardino  - got a financial deal for his client on payment for services.

But he draws a picture for his readers of “celebrity Victoria lawyer Kevin McCullough [looking] like Mother Teresa flying to Vancouver to help spring the poor, the indigent, the unfairly locked up….”

Then – missing the point completely – Mulgrew gives the instance of a fellow with 78 convictions, arrested on “sex assault, assault and threatening charges” who Kevin McCullough got released.

But of course he did!  When the legal and court system fail, ALL the jailed (not yet tried and judged, and so, in our system, innocent) are done injustice.  It is easy for the irresponsible to say “why shouldn’t THIS ONE stay in jail.  I don’t like the look of him or her”.

But that a major commentator on law and the courts for a major Canadian newspaper would suggest that kind of thing is … well  … Madness.

Comments:
We are taken for fools, are we not. From Northern Insights:

"...the country's top judicial officer, Supreme Court Chief Justice Beverley McLachlan, says today's judges are subject to sanctions:
"They are accountable to the Canadian public and there are numerous mechanisms in place that ensure their accountability, while respecting the need judicial independence."

"McLachlan admits people sense that judges have assumed that they were above scrutiny. She says that belief has lost currency and offers these mechanisms as proof of accountability:

- the sanction of removal;
- the built-in accountability of our open court processes;
- public and peer review; and
- the principle of deference developed as a protection against uncontrolled judicial power.

"I won't bother to argue that McLachlan's self-serving statements are fatuous but that argument might be made by the fact that not one superior court judge has been removed from office. The Canadian Superior Courts Judges Association claims five have been recommended for removal since 1867 although the Toronto Star reports the Canadian Judicial Council has only twice recommended to the federal justice minister that a sitting judge be removed from office. In those cases, the judges resigned under pressure.

Ms McLachlan offered you an irresistible target, Norm, and you ran with it.

Let's keep it going, until at least even ONE of those safeguards kicks into action.

It's time for a general strike as OUR Rights have been taken away Re: BCSC threw out the biggest political corruption scandal in the history of BC and possibly Canada!
I believe that no matter what we do or say in this OUR PROVINCE WE lose, so lets use the only tool WE seem to have left and that is a general strike or to REVOLT!

The world or 1/3 are fed up with dictators and the extreme corruption so they are doing the only choice that's left "REVOLUTION"!

This comment has been removed by a blog administrator.

Thanks for the kindly thought, but it would be a mistake to use someone else's copyright material.

I wasn't suggesting you use it without asking for permission. Also to be fair to "Anonymister" that isn't me. I just read that person's comment on another website and thought I'd send it to you because it seemed to really fit with what Robin Mathews wrote.

bc ferry sinks,crew gets off no one arrested 2 dead.in italy captain arrested