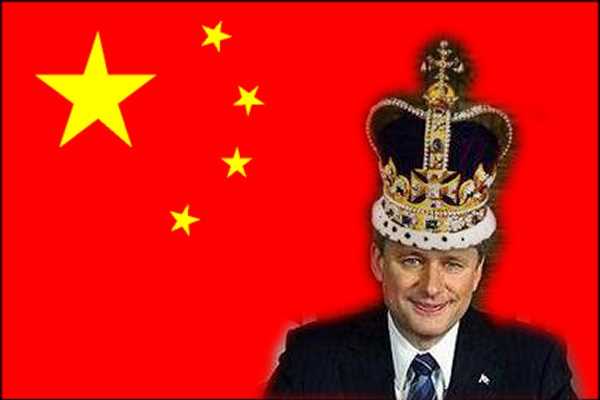 To Save It From Stephen Harper Fascism

The Stephen Harper forces are putting the torch to Canada, to the rule of law in Canada, to Canadian freedom of expression, to Canadian electoral integrity, to Parliamentary legitimacy … and more … every day.  Their Mein Kampf-style plans become clearer with every hour. Having won majority power by what appears more and more to be major election fraud, their imposition of “junta rule” in Canada grows.

Maybe.  But an increasingly large number of Canadians are not confused.

One of the latest, gross invasions of Canadian democracy by the Stephen Harper forces is a treaty with China, called The Canada-China Foreign Investment Promotion and Protection Agreement (FIPPA).  To put the matter briefly: “the Canada-China treaty effectively concedes legislative and judicial elements of our sovereignty…” to, in fact, Chinese agencies. (quoted from Gus Van Harten, Osgoode Law Professor, letter to Stephen Harper).

The implications of the treaty for the destruction of Canadian democracy and independence are enormous.  The treaty was never formally considered by the representatives of Canadians in the House of Commons.  It was never discussed in presentation to Parliament.  There was not a moment of debate about its intent, its construction, its implications, its effect - in the House of Commons or any of the provincial legislatures.  The treaty was created by the Harper Junta, in secrecy and in private with Chinese agencies working in the same way.

The “arbitrators under the Canada-China treaty operate outside of the authority of the Canadian legal system and Canadian courts [and so] the treaty appears to contravene the judicature provisions of the Constitution concerning the role of the superior courts.” “Notably, the arbitrators may make non–monetary orders against states as well as issue damages awards for potentially massive amounts.”  [Gus Van Harten, letter to Stephen Harper.]

We remember Stephen Harper undertaking another violation of democracy in relation to British Columbia.   Almost certainly in concert with Gordon Campbell (who Harper paid off with the position of Canadian High Commissioner in London) the two appear to have arranged a surprise imposition of the infamous HST in B.C. Gordon Campbell (in collusion with Stephen Harper, we may be sure) declared he would not impose the HST in British Columbia.  A few weeks after re-winning election, he did so … to Stephen Harper’s delight. It was a minor coup, but only child’s play compared to The Canada-China Foreign Investment and Promotion and Protection Agreement (FIPPA).

But the HST coup, you will remember, lasted a very short time.

And it did so because British Columbians rose up and forced the Gordon Campbell/Christy Clark Harperites, by referendum, to withdraw the HST.  Democracy prevailed despite a Harper/Campbell attempt at Junta Rule and at an anti-democratic coup.

At the time of the victory celebration Chris Delaney, referendum activist said “we know the referendum works, we know it has a legitimate place in our society, our democracy now.  The people have endorsed it overwhelmingly.”

There is nothing to stop British Columbians using referendum again in this hugely more vicious and destructive attack on democracy in Canada and in the province of British Columbia – an attack undertaken by the Stephen Harper government in collusion with the government of China and its corporations.

[Gus Van Harten suggests the treaty with China may violate Canada’s Constitution.  A constitutional challenge to the treaty, therefore, might be undertaken. But that cannot be the only route of challenge, because of the time it takes – and especially since the Harper Junta is undermining the rule of law in Canada every day, the police forces, and the courts. Even (after a long passage of time) a win in the Supreme Court of Canada wouldn’t stop the Harper Junta from signing just such a treaty again (and even during Supreme Court hearings) and working on many other ways to destroy democracy in British Columbia and the rest of Canada.]

The wording of such a British Columbia referendum, therefore,  would have to be narrow, direct, and clear.  It could not, effectively, request or demand anything from the federal government.  The B.C. referendum process has no power outside of British Columbia.  Stephen Harper could simply laugh at a referendum - even overwhelmingly carried –  asking him to change Junta law and policy. Nothing British Columbians could do to sway the Harper Junta could work – through referendum.

And so the people of British Columbia are driven to a simple question, within their own powers to ask and then to act upon. It must be a question that erases the power of the Stephen Harper Junta to impose fascist, oppressive, democracy-destroying laws upon British Columbians (and other Canadians).

The question must ask British Columbians if they wish to leave Confederation, to separate from Canada, and to set up (in whatever sovereignty-association status they wish to have in relation to the federal government), a democracy that cannot be forced by Ottawa to erase itself and accept totalitarian domination by Ottawa, by any foreign power, or by any combination of the two.

[Such a referendum could be sponsored or supported by the B.C. government – or like the referendum against the HST could be conducted legitimately against the wishes of the presiding provincial government. Government can refuse to act on the outcome of a referendum in most provinces … but a referendum with this kind of question would be hard to refuse if a strong percentage vote supported it.]

[Referendum legislation exists in most other provinces in Canada.  People in those provinces should be urged to move immediately, also, to set up referendum organizations with the same purpose in mind. Later they might “re-Confederate” in a Canada that couldn’t rob them of democracy in the service of global thieves and looters.]

Comments:
Yes indeed, Stephen Harper must be stopped, he will be stopped, imposed laws and draconian rules cannot stand under the pressure of the vast majority of British Columbian`s population, of it`s voters.

Harper has gone too far.

Pitchforks and brass knuckles, will the rest of Canada join with us to stop a madman named Stephen Harper?

Will Canadians sit idly while Harper sends in the Canadian, or even the Chinese army to slaughter us?

Time to take back Canada, whatever the cost may be.

I totally agree with the assentation's in your blog on this subject. I feel it is imperative that we take action now. Those who supported this legislation are traitors to Canada and should be tried as such.