B.C. Rail was part of the continental plan for North American Union

While Gordon Campbell was promising in 2001 that his government, if elected, would never sell British Columbia Railway, plans for the North American Union based upon the NAFTA-NASCO SuperCorridor were under way. One glance at this map will explain why our railway proved irresistible to the empire-builders (elected and unelected). Many thanks to Salt Spring News, an excellent online news site, for the excerpts and map. And thanks to kootcoot for his skillful transfer of it to this site. - BC Mary.
________________________________________________________

Canadian National Railway Company serves Canada and the central United States over a network of 19,200 route miles. A true transcontinental railroad, its lines stretch from Halifax, Nova Scotia on the Atlantic Coast to Vancouver and Prince Rupert, British Columbia on the Pacific Coast, and north to Prince George, and beyond (see map) and also extend south to reach the Gulf of Mexico at New Orleans and Mobile, Ala. In between, its tracks serve the cities of Quebec, Montreal, Toronto, Buffalo, Detroit, Chicago, Winnipeg, Calgary, Edmonton, St. Louis, Memphis, and Pittsburgh. ...

A genealogy of the well-known railroads that make up today's CN.

Endnotes: In our musings, we are coming to see the giveaway of BC Rail as perhaps part of the North American Union project, just as the Campbell coalition's energy policies are a part of that corporatist hidden-in-plain-view project.

Over the period 1986-2006, the overall funding for the four-thousand-mile NAFTA-NASCO SuperCorridor--running through the heart of the United States from Mexico to Canada--has two financial components, one private, one public. 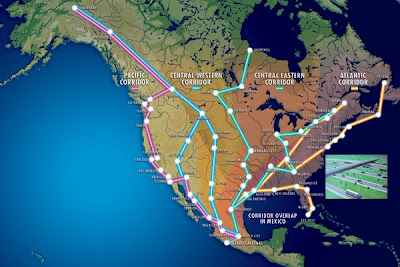 The NASCO Corridor encompasses US Interstate Highways 35, 29 and 94, and the significant east/west connectors to those highways in the United States, Canada and Mexico.

The B.C. Rail story is crying out for a Public Inquiry but only if it guarantees a final, full report to the people of B.C. - BC Mary.

Comments:
Came here via the Tyee. This argument is somewhat...paranoid, no?

Well, anonymous, if this is the ONLY statement you've seen about how B.C. Rail fits into the plans for a North American Union, yes, it might appear to be "somewhat ... paranoid". Even one of the authors says that, within the article. It would be a wild and lonely position to take -- if you were the only one explaining these things.

But a learned friend has loaded me up with a range of useful URLs which, I tell you, set me off into a deep gloom last evening as I imagined: what would a 12-lane north-south superhighway do environmentally to the continent? to British Columbia? And I wondered why we're fussing over lightbulbs and hydrogen fuel ... knowing that heavy trucks and trains with pipelines alongside will be roaring the length of the North American continent hauling such things as coal ... for the coal-fired generators in China ...

This blog is focused on B.C. Rail which appears to be part of this HUGE North American Union plan to transform the continent. So I make NO apology for posting that piece of information.

But if you'd like to know more, contact me (bcmary14@rogers.com) with your e.mail address and I'll send you the URLs privately, as this really is the nation's business.

Why worry about "Deep Integration" when this N.A.U. Superhighway, of which B.C. Rail is part and parcel, is already well under way creating exactly that!
.

Mary: This a little off base. CN has been billed as the NAFTA railroad since 1998 when it acquired the Illinois Central so it should surprise no one. CN was created i.e. privatized by Mulroney and his boys as a nod to NAFTA. For you and BC Rail you best start looking at the relationship between David McLean and Campbell..it goes way back

Aw, come on, Anon. "Off base" ... off what base? You complaining because BC Mary isn't an expert on NAFTA implications or Illinois Central?

Because I surely WAS surprised by the depth of the implications of what I read last evening.

I'll do my best to "start looking at the relationship between David McLean and Campbell" but you could surely be a lot more helpful yourself. OK?

Btw, is your name Tim? I seem to recall dancing this minuet twice before.

Metacrawler Hit #1:
From The Tyee:

British Columbia is booming. At least it is if you’re David McLean. Of all the British Columbians who’ve prospered under the Liberals' New Era, McLean might be the top of the list.

The various business interests of the long time Gordon Campbell supporter and fundraiser have benefited, to the tune of hundreds of millions of dollars, from Liberal policies over the last four years.

McLean’s Vancouver Film Studios booked $200 million in new business for this year alone when the government increased the film industry tax credit in January. And the value of McLean’s substantial shares in CN Rail, where he serves as Chairman of the Board, has increased by millions of dollars since the private company bought BC Rail from the government in 2003.

McLean is the chairman and CEO of the McLean Group, a family owned collection of real estate, film and television companies centered in Vancouver. The 66-year-old business mogul has also been a major catalyst in the political career of Gordon Campbell.

In 1993, Mclean was part of a group lobbying the former Vancouver mayor to run for the leadership of the BC Liberal Party. And three years later, he organized the fundraising for the Liberal election campaign.

McLean also gave generously of his accord. Last year he had a finger in $20,000 of donations to the Liberals. His name was on the $14,000 plus donation from CN (where he serves on the donations committee) and his Vancouver Film Studios gave $2,000. McLean, his wife and his two sons, all of whom serve as senior executives for the McLean Group each gave identical $1,000 gifts.

Among the many holdings of the McLean Group is Vancouver Film Studios, a sprawling complex just minutes from downtown at Boundary and Grandview.

With 13 sound stages, a helipad and a full scale model 737 complete with cockpit, first and business classes, Vancouver Film Studios is the largest film complex in North America outside of Los Angeles.

Relying on the low Canadian dollar, competitive BC tax credits and a $20 million loan from the NDP, the studio expanded in 1999 to accommodate major features like I Robot and X Men II, and TV Shows like Dark Angel and Smallville.

hi Mary:
I think you have about covered it; the anon above here is obviously just starting his/her education in Campbell complicity studies.

Still a ways to go I'd say.

Maybe there is hope though. New people are gradually waking up to what's been going on.

Unless, as you say, it's just Tim in anon clothing.

Goes with the season I guess.

How much did they give, I wonder.

CP Rail and it's executives?

Well, I think we can probably come up with a pretty good guess.