.
The CEO of Canadian National Railway Co. is preparing to retire, leaving an admirable record of accomplishment 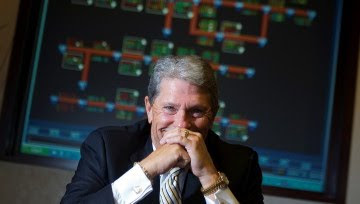 Did you ever see the deal, British Columbia?

Montreal — In his 16th floor office in Montreal, Hunter Harrison is reminiscing about his birthplace of Memphis, where he grew up a kilometre down the road from Elvis Presley's Graceland mansion.

The king of rock 'n roll would often rent the Memphis fairgrounds, using it as a private amusement park for his family and friends after closing time, and one night, a teenage Mr. Harrison managed to score an invitation through a buddy who knew one of the singer's confidants.

“Elvis leaned on a wall with his motorcycle hat on,” recalls the chief executive officer of Canadian National Railway Co. (CNR-T52.32-1.08-2.02%) “There was a lady then that Elvis was going with named Anita Wood. She was a local TV star on a dance show like American Bandstand .

Memphis has emerged as CN's main southern U.S. hub, a strategic yard that handles freight that arrives after long journeys, including Asian imports sent along CN lines from the Port of Prince Rupert in British Columbia. Memphis, where CN interchanges traffic with all four major U.S. carriers, is also the company's gateway to its Gulf of Mexico region operations.

In a fitting tribute, CN has named the Memphis distribution hub after its CEO, unveiling the Harrison Yard last month after spending $100-million to nearly double its capacity. What was once an aging flat yard has been converted into an industry model of efficiency after CN added a hill, or “mini-hump,” to better shuffle trains into proper position. “Memphis is particularly a very important spot for CN going forward,” Mr. Harrison says.

Although hurt by the recession, CN has been a popular stock for investors since the initial public offering came out at $27 a share in 1995, or a split-adjusted price of $4.50. Taking into account stock splits, but not dividends, an investor holding 100 CN shares worth $2,700 back in 1995 would currently have 600 shares worth $32,040.

“This will go into the history books. No other railroad has come close in the last 14 or 15 years,” says Mr. Harrison, who will leave at the end of this year, to be replaced by Claude Mongeau, CN's Quebec-born executive vice-president.

Mr. Harrison admits that he has been sensitive to being an American in Montreal, serving as Paul Tellier's right-hand man for five years, after CN acquired Illinois Central Railroad Co. in 1998 before taking over as CEO in 2003.

“Paul Tellier and I used to joke about this. We would cross the border for visits. He went south and I went north. He got to Jackson, Mississippi, and they'd have the red carpet out, catfish and fried chicken. They didn't have any red carpet out for me here, and I don't know if it was me, or if Paul was just so charming,” Mr. Harrison says with a laugh.

He pokes fun at his own attempts at speaking French, even trying, “Bonjour, y'all,” as a greeting in New York.

As the time draws closer to pack up the trusty golf putter he keeps in his office, he says he will be only a phone call away should Mr. Mongeau feel the need to ring. Gone, however, will be the Hunter camps – retreats where Mr. Harrison could easily speak for two hours without any text about the importance of railroading.

“If there are going to be camps, there will be Claude camps. There will be things that he will want to put his touch on. If you want to be a good leader, you got to make tracks of your own,” Mr. Harrison says.

Comments:
I guess that the Goober and Maul didn't get the memo from Texas that it is CN now and not Canadian National Railway Co. Then again, maybe the Globe and Mail is trying to leave unsaid that there is nothing Canadian about CN anymore, anymore than BC Rail has much to do with or FOR British Columbia.

Here we have a guy from Tennessee, who still has his Tennessee drawl, but has been successful enough to move to Connecticut, the state represented in the Senate by the Senator from Israel Joe Liarberman. I saw old lying Joe excercising restraint on the news yesterday as he stated he "didn't want to blame Canada" but he wished they had as much H1N1 vaccine done there in Yankee Doodle Land as we do - if I had the time I would be perfectly happy to travel to Conn. and shoot him full of vaccine, especially if there was lots of mercury in it.

But where does Lord Gord's buddy Mac or McLean fit into the CN executive structure - or did he retire with his bonuses he likely got from stealing our railroad?

Jeez, you've got to be kidding.

I used to work on the 13th floor of that building in the engineering and design department...in those days, we called installations and facilities by 'location' names (Port Mann yards for example) and not in honour of anybody...too bad they didn't re-name the CN tower as the Hunter Harrison erection.

and the most significant detail in that whole news report is

the photo of H.H.

Perhaps we will be fortunate enough to see a new epidemic in the very near future....you know the one where rich older corp execs (thieves) end up drowned in their swimming pool.

Better than them drowning us in debt for their profits and pleasures.