Premier Campbell painted as micro-manager in BC Rail trial
By Mark Hume
The Globe and Mail - June 14, 2010 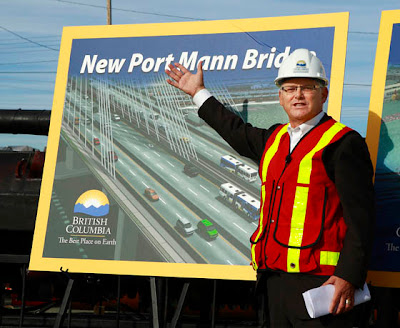 "And this sign represents some of my best work!"
BASI-VIRK

Defence alleges Premier Campbell a "micromanager" - Chief of Staff Martyn Brown calls his actions "an appropriate response"
By Bill Tieleman, 24 hours columnist
Is Premier Gordon Campbell a “micromanager” who gets so involved in the details of government decisions that he had to sign off his approval on the design and colour of B.C. highway signs?

That was the unusual allegation Monday at the trial of three former B.C. Liberal government aides facing corruption charges connected to the $1 billion sale of B.C. Rail in 2003 ...
http://billtieleman.blogspot.com/

More details emerged about the role of Lara Dauphinee in the BC Government. When asked what role Lara played with the BC Rail deal in 2002 based on documents put to him, Martyn Brown claimed that Lara would not have been involved with the policy or discussions around policy.

The Premier's office vetted speeches and presentations from a Prince George conference in Nov 2002 designed to begin the sale process. Clearly an attempt by the Premier to maintain his hands on approach to government.

Martyn Brown admitted that the Premier's office was hands on in handling the BC Rail sale and had many staff working on the deal including BRENDA EATON, Deputy Minister to the Premier and another witness in this case.

Bob Phillips of BC Rail had his speech/presentation edited by the Premier's office as well.

Key name that came up today and was whispered to the defendents was RANDY WOOD - a communications PR guy who works for National Public Relations.

More questions and denials from Martyn about any knowledge of leaks of information by Prince George MLAs.

The strangest answer from Martyn Brown was regarding that the Special Prosecutor associate, Andrea Mackay, possibly showed a document to the witness, Martyn Brown. That raised many an eyebrow from the gallery.

Comments:
I am travelling to Vancouver on business this week and I plan to attend Courtroom 54 to view the weirdness of the whole goings on. Somebody must be driving Martyn Brown there as how could he, bad memory(possible Brown-out!!!!!!) and all make it there on time every morning. I have never attended a major court proceeding, so it should be interesting although most people would probably enjou having their fingernails pulled off instead. I will be looking for a place to enjoy a glass of BC red after most likely, as frustration with the whole thing sets in. Keep up the good work.

I wasn't surprised to hear and/or see NOTHING on Glow Ball News about the BC Rail Corruption Trial yesterday - though "Cheeks full of Nuts" Baldrey at Five AND at Six made a point of pointing out that the signatures on the HST petitions couldn't be used to recall MLA's upon pain of jail for canvassers while Debra Hope and Chris Gailus posed as Stoopid people to give Keith his chance to look smart (unsuccessfully, I might add).

Imagine if this trial involved the Chief of Staff for an NDP Premier who either couldn't remember anything he had done, heard or seen for fifteen years or more or just found it impossible to tell truth. Not only would the daily absurdity be the featured part of every newscast, but regular programming would be interrupted for updates direct from the courtroom every half hour all through the day.

The media landscape is likely to get even worse after today's announcement by Quebecor regarding Canada's own Faux News Network. Or as Canada's #1 Idjit Ezra Levant puts it, "finally a "balanced" news outlet for Canada" (approximate quote) - yeah, "fair and balanced" just like the real Fox!

It should be criminal the way the mass of the media are complicit in criminal breach of trust by those who are supposed to be representing our interests. If the CRTC actually acted in the public interest with its administration of the PUBLIC airwaves these people would justifiably LOSE THEIR LICENSES TO LIE!

Perhaps Mr. Wood has good taste in his internet browsing/reading, because somebody from NatPubRelations regularly visits the House of Infamy

Maybe Randy should tell Gordo that I will write nice stuff about him, IF Gordo will appoint me Lt. Governor General. He could tell Stevie that a Senate appointment would get him good PR from me also. Can I be both Lt. Gov AND Senator from the Kootenays?

It seems to me that Berardino does a lot of jumping up and objecting - for someone who's supposed to be distanced from ALL players in this "trial." Especially when the questions involve his buddy Gordo.

The only thing getting tried here is my patience...Mr. Brown would last about 15.3 seconds in my employ with a memory as lousy as his "seemingly" is.

Hey Koot. Isn't that Enza Levant you're talking about? Is he still 'dressing up'? For sure he's still an idjit!

We all must thank our lucky stars for the fine reportage of Citizen Journalist 54!

Especially for telling us things that the accredited proMeds have not, including the comment from Mr. Brown that he may have been shown a document by SP Junior Mackay?

Oh, yes indeed, RossK ... many thanks to Citizen Journalist "54"

and to our big thanks to RossK as well, who always finds the nuggets for us.

Extra hands on deck are extra appreciated this week, as Robin Mathews is busy elsewhere ALL WEEK ...

and we have only 3 more weeks of Live Performance before Madam MacK's declared summer holiday begins: July 7 to Aug 31 (remember, that's what she told the jury?).

Thanks all. And CFVUA, we'll look forward to your comments on what you're seeing in Courtroom 54 today, too.
.

a public spending watchdog has issues with Campbell using public funds to attend the meetings.

"It's not clear what the taxpayers of British Columbia would get from him going," said Kevin Gaudet, the federal director of the Canadian Taxpayers Federation.

"He has to come clean on what the benefit to taxpayers is. Saying it was a networking meeting with mucky mucks internationally isn't good enough. He'd better come up with a better excuse than that."

A spokesman for Campbell said the talks focused on "economic issues" and that he, "attended as the Premier of B.C. and as such, his expenses were paid by the gov't (sic) of B.C."

If those attacks on the government's credulity re the Labour Contracts are what Bolton has been doing, it would seem to be that Defence Lawyer No. 2's strategy is to cast doubt on the credibility of all witnesses from the government, including the Premier himself (who, if the trial continues, will not be able to resist the court's summons to appear....even if he resigns beforehand).

"If they didn't fulfill all these election promises, and broke contracts willy-nilly, why should you believe anything they say about the matters concerning BC Rail?" is what this line of attack will say to the jury. "They lie, time and time again, and when confronted with their lies, they claim not to remember. Nothing they say on the stand can be taken at face-value because of that; especially the claim that they do not remember."

These are all micromanagers, not just Campbell. They can remember what flavour toothpaste they used on a given day, nothing escapes them. They're lying about not remembering; I hope some evidence comes along that trips them up. Although it's hard to send someone to jail for "gee, I'm stupid AND forgetful".

Robin's bucking for Mackenzie to level him with a contempt charge; when that was done to Cram and Bruce Clarke (the other Bruce Clarke, re Gustafsen Lake) the cases in question had a lower profile (or so the media had managed to render them). The person who deserves the contempt charge, though, is clearly Martyn Brown. And no doubt the rest of the Liberal Party machine when their turn to sit in the hot seat comes.

Isn't there some clause by which they can compel him, and others, to answer?

And at some point the logistics of a Supreme Court of Canada injunction to suspend CN's operation/ownership of BC Rail, i.e. to rescind the deal. Surely "since the matter is before the courts" is all the answer we've gotten from them, then the deal should never have gone ahead, and should be repealed by a higher authority forthwith; smae with blocking the wind-down legislation.

Originally all that was before the courts was the OmniTRAX/Roberts Bank matter; it was the elected officials who, in refusing to answer, put the whole matter of BC Rail entire into the courts. Apparently so they don't have to talk about it.

But now that they do, it's time they recognized it was their own evasiveness and deceit that brought them to this point. Which includes having Defence ably demonstrate to the jury exactly the amount of credibility those from The Machine don't have....it may get interesting as Bolton dissects all the different ways they lied....no doubt the doctors' contracts getting torn is up is another good example.

But again, if the matter is before the courts, the matter of a corrupted bidding process, now demonstrable in evidence and about to be brought before the jury in gory detail, means that CN should not keep the proceeds of crime. Even if it was only the Liberal government/machine and not CN itself who were deemed to have committed the crime; though CN as the party's and Campbell's main backer seems to be inextricably involved.

Hey Wall Street (and that guy from Bloomberg) - tip on CN stock. Unstable, likely to have an acquisition re-nationalized due to the illegality of the sale and its contracts. Sell, sell, sell.....