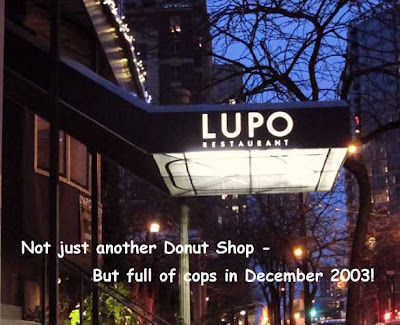 Neal Hall, having an opportunity to publish in the Big Paper, the National Post, hones in on defence lawyer Mike Bolton's questions about the famous dinner at the Villa del Lupo attended by finance minister Gary "Ferret" Collins, executives from Ominitrax and a herd of undercover RCMP posing as diners, busboys and other staff.

VANCOUVER - British Columbia's then-finance minister Gary Collins was under police surveillance in 2003 while meeting with executives of a U.S. bidder for BC Rail, a Vancouver jury heard yesterday.

Mr. Collins ignored the advice of a "fairness" consultant that ministers were not to meet with bidders before the bidding was closed, and met the top executives of Denver-based OmniTrax for dinner at a posh Italian restaurant in Vancouver.

The dinner took place about two weeks before police raided the B.C. legislature on Dec. 28, 2003, and carted away boxes of material.

Why Mr. Collins was under surveillance during the meeting was not explained to the jury at the trial of two former political aides accused of corruption in the BC Rail sale.

But defence lawyer Michael Bolton suggested yesterday to the Premier's chief of staff, Martyn Brown, that Mr. Collins was trying to offer OmniTrax a "consolation prize" for staying in the BC Rail bidding.

"I strongly say that never happened," Mr. Brown testified. "I would emphatically deny that." He also said he had no memory of any discussions about the defence allegations.

Oops, I copied almost the entire article! But then it wasn't much of an article and it didn't have anything new to say - the dinner at Villa del Lupo is old news and for Martyn Brown to either not remember or deny anything he apparently does remember is pretty much same old, same old, also!

Our man, a genuine journalist who is not a member of the "accreditation panel" Bill Tieleman, as usual goes into more detail about the games Mr. Brown played on Thursday, the full story of which can be found at his place in Patrick Kinsella never lobbied me.

Mr. Brown out did himself with the following (bolding by kootcoot)

Premier Gordon Campbell’s chief of staff strongly denied defence allegations Thursday that B.C. Liberal Party insider Patrick Kinsella was working for both sides at the time of the $1 billion sale of B.C. Rail to CN Rail.

Martyn Brown denied repeated allegations from a lawyer representing one of three former government aides facing corruption charges related to the sale, that Kinsella was “working both ends” in the $1 billion deal.

Brown responded that Kinsella was not only not a lobbyist but was “one of the most community-minded, giving, considerate people that I know who cares very deeply about the future of the government in British Columbia - not just in British Columbia but Canada, who has an active role in politics and supporting government of his political persuasion.”

How much a person can care who can't remember anything is somewhat perplexing, but then the fact that (in)Justice MacKenzie doesn't suggest that Mr. Brown be more responsive to questions is perplexing as well!

1) Neal Hall's stenography demonstrates how the pre-trial publication ban is acting squelch public understanding when he says..."...Why Mr. Collins was under surveillance during the meeting was not explained to the jury....", because we who have been paying attention know exactly why.

2) But here's the thing, if you just analyze all of what Mr. Brown said you can actually come to very interesting conclusions wihout hurting any pre-trial publication bans. For example, a close reading of Bill Tieleman and CJ from Room 54's much more fulsome descriptions of the exchange between Mess'rs Bolton or Brown re: the meet-up at the Lupo, led me to conclude that Mr. Brown worked very carefully to cleve he and his boss from any and all actions undertaken by Mr. Collins. Or, put another way, I believe that Mr. Brown essentially threw Gary Collins under the bus last week. Now, why does that matter? Well, it sure has me wondering if Mr. Collins is still going to be willing to take the big one for the team when he gets on that stand later in the trial....

____
Oh, and if you really want to know exactly why, you can always go to my place and punch 'lupo' into the search box....The post you want is NOT the first one that pops up.

We can't have our ministers/governement, pimping out, 'whatever, makes a good consolation prize', at any level of being illegal,let alone immoral or down right barbaric.
The jig is up.
Time for goods cops to take back their right to protect us all!
You wouldn't want any slim ball living next door to you, so why give them authority?
Else where in the world, this is frowned upon as a take over, by hostile enimies.
The jig is up,
Canada!
Why, won't you fight back???

Pardon me, Mr Brown, Why would anyone lobby you?

Given your 'performance' in court thus far, it seems likely you'd forget the meeting five minutes after it had taken place anyway!

Another infamous "detail" guy who suddenly developed a serious case of memory loss.....must be a highly infectious Bilderbergian virus.....

"No fewer than 82 times during the three-hour hearing, Rumsfeld and his former military colleagues were heard to utter "I can't recall," "I don't remember," "I don't know" or a variation of these. So forgetful was Rumsfeld that he repeatedly neglected to turn on his microphone before speaking, requiring frequent reminders from the panel. "......

"Air Force Gen. Richard Myers, who earned a reputation for obedience to Rumsfeld while serving as chairman of the Joint Chiefs of Staff, joined his former boss in memory loss with answers such as ""I do not recall this, nor does the secretary recall." .....


"The pair dropped excuses like cluster bombs. Rumsfeld pointed out that "it's not possible for someone to know all the things that are going on" in the Pentagon. Myers asserted that "this is the responsibility of the United States Army, not the office of the chairman."......

"Rumsfeld, in his opening statement, spoke of his memory loss as if describing somebody else. "I am told that I received word of this development sometime after May 20, 2004," he told the committee.'.....

"Chairman Henry Waxman (D-Calif.) probed the memory of Myers, who admitted "no recall" of how he learned about the fratricide. "I don't know how I knew it," he said."....

"I have no idea," Rumsfeld replied.

People with such terrible memory problems should never be allowed to continue in such sensitive positions - one never knows what information may be leaked.

They really ought to be put into a home for those with onset dementia, kept free from all sharp objects...and allowed outside only when accompanied by a responsible adult.

Very interesting article. Who? Where? Why? When? and what in return? All citizens deserve to know who is pulling the strings with our politicians.

Martyn Brown should have a mental evaluation. How on earth did he become, Chief of Staff? Does he even remember to tie his shoes? His lapse of memory, should be of great concern, his memory seems selective. The corrupt sale of the BC Rail, trial case, stinks to high heaven. The puppetiers, are out in force, to pull the strings. Will the truth ever be dug up? Not on your nelly.