Holiday in the High Court

Even though today is the Summer Soltice, it is still apparently a working day at Vancouver Supreme Court. However Case 23299 (Basi-Virk  et. al.) is on hiatus until tomorrow. According to pages 53 and 54 of the current completed cases (from last week) the next appearance for the BBV crew is tomorrow June 22 at 10:00AM in Courtroom 54.


The following piece was posted yesterday at theHouse of Infamy 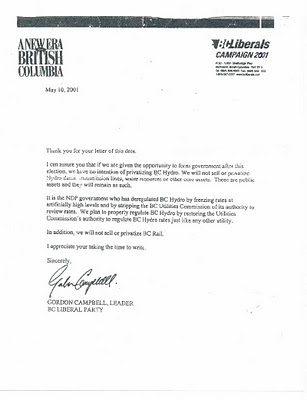 The letter above (click to enlarge so it can be read *) was from candidate Gordon Campbell to a voter in the north/central BC Rail corridor in early May, just before the deluge election that sent the Gord into the Big Chair. The letter talks about things such as:


The voter had written with specific questions for the Man from Marathon and upon receiving the answers above probably even voted for the WHPinC (White-haired Prevaricator-in-Chief)- to his everlasting dismay, no doubt! This is documentary proof that Gordon Campbell can LIE without even moving his lips. Of course we wouldn't expect any less from our own Prevaricator-in-Chief! I'm sure that there were probably enough phoney letters like the above cluttering mailboxes from Atlin to White Rock, back in the day, and the lying just goes on, only lately it would seem even under oath!

* Anyone wanting a high resolution copy of the letter above can e-mail the koot with "promise2001" in the subject line. It is perfect for framing to hang next to the silk screen montage of the Maui drunk shots!

Comments:
Has anyone in Canada ever launched a civil suit for fraudulent election promises being broken? These were premeditated, as we know from Paul Nettleton's written "testimony" about what went down behind closed doors before and after the 2001 election....

A class action suit against Gordon Campbell personally plus any co-conspirators in the fraud could force the federal Crown to lay criminal charges (because the provincial A-G surely won't).

OJ Simpson beat his criminal rap; but still had to face the civil suit which found his guilt differently.....

That letter should be re-sent, with commentary, to all British Columbians as a reminder of exactly what kind of con job the "Golden Decade" has proven to be.

gordo and his demon lair of liars 9yrs of pre-meditated lies!
Who is keeping this despicable band of vermin afloat?
How much has OUR BCSC been compromised by the right wing-nuts?