The Opacity of LIEberal Transparency 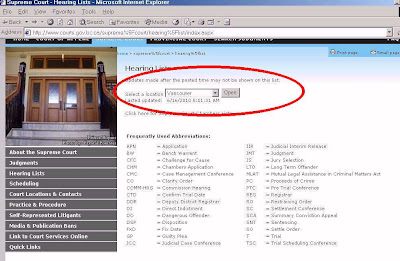 Note the area circled in red, where it states
Updated 6/16 at 8:11AM
This screenshot was taken over 24 hours later at 8:15AM 6/17
(Click on Image to Enlarge to readable size)

In my attempt to carry on BC Mary's tradition, I went to the CSO or attorney general's helpful (hah!) website to check out the schedule for the fantasyland at the Vancouver Law Courts for today June 17, 2010 - or the place where Martyn Brown holds court while pretending he is as stooopid as he is venal. Well apparently there are NO TRIALS going on there today, or at least none that the powers that be are willing to share basic information (like whether it is scheduled or not) about.

I gave up long ago trying to keep up to date with whether or not a hearing or actual trial session was happening on any given day, and have just referred to BC Mary when I cared to know. After all, since I don't live in the West End of Vancouver, what's the point - it isn't as if I would have time to decide to attend.  Thus when I went to my blog to link to the schedule  for today I found that my link to this was no longer valid. Just another little step by the genii in the office of the AG to make it a little more difficult for a citizen to know what the criminals it appears to be the purpose of the justice system to protect are doing.

But according to the schedule, supposedly published at 5:56AM (and last checked by me at 8:15AM) this morning, as I said, there are NO TRIALS taking place today. There are nine pages of "Chambers Applications," whatever the hell those are, but not a single trial or pre-trial hearing listing at this link. Once to this link, select the Vancouver Law Courts location and you too can find NO USEFUL INFORMATION.

These guys are absolutely SHAMELESS and couldn't possibly be this useless - THEY HAVE TO BE DOING IT ON PURPOSE to cover their slimey, sleazy asses!

Comments:
Check back around 11Am to 1PM when suddenly up pops the BB&V group. Even if you lived across the street it would be a bit late as the court gets underway at 10AM. Mike DeJong makes a big deal out of stopping the costs( later this year) for checking cases on line but somehow can't seem to light a fire under the folks sending out the court lists. Is it staff shortages or what? still nothing at 0926

This court case isn't just about corruption, oh no, it is about our whole system of government and law.

I did not say democracy, because it is my firm belief we to not live in one.

What I see is a shambles - an utterly corrupt legislature, abetted by an equally corrupt legal/police system; kept in power by a massive corporate media empire where profit is more important than the truth.

Of course the media is like a dog wagging its tail for a few scraps, like an 'Order of Canada' here or a Senate appointment there.

In fact we live under a lawless society, where the law is used to maintain wealth and status and brow-beat any and all not wealthy enough to be considered an elite.

Most likely a Campbell connected tweek or the court system is so screwed up, they can't do anything right. I suspect that it is a bit of both. Hopefully, we will get some report from BillT. and Robin M. later.

What a way to go - quite a legact Scampbell is leaving British Columbia these days.

How can the Special Prosecutor defend his problematic witness?

He cannot deny or cannot recall. This is outrageous and messages should be sent Bill Berardino.

Maybe that friend of the Special Prosecutor Gary E can ask Berardino and the team what is going on...

Maybe you should get off your ass and let your fingers do the walking if you're so interested in what wee Willy has to say.

And whoever told you he was my friend must have been a Liberal troll. Or maybe you are. because they are full of shit and/or Liberal Liars