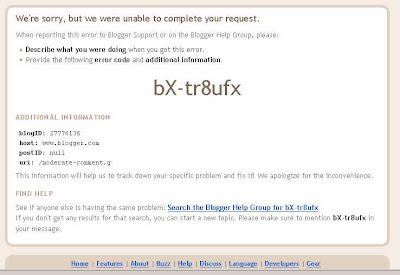 Click on Image to display in actual size as usual
I not only have a life besides the House of Infamy and trying to cover for BC Mary during her residential disruption , but generally sleep well and soundly each night, not having a bunch of guilt over exploiting the law and my fellow humans and the planet during my waking hours, and that is one reason why comments sometimes take awhile to appear here a the Ledge Raids.

Lately there has also been some other problems, like the one indicated in the illustration above, The one above came as the result of attempting to delete a spam comment in Russian, but it also happens when I'm trying to release/publish real comments sometimes. Also sometimes commentors may receive their own error messages that may or may not be correct - sometimes the comment has actually gone through in spite of 404 or other error message pages to the contrary. Then of course I have to get up or come home get online and not get an error like the above.

Anyway, I just wanted to reassure anyone who may feel their comments are being lost or ignored - hang in there and most likely they will appear and hopefully not too long after you've left them.  BTW, I don't really think that Google is in league with Canned Waste, Glow Ball, CeeTeeVee, CeeKayEndDubya and the PABlum Brigade and working for Gordon Campbell and his gang of thieves - but then ya never really know does ya?