WHAT IN THE HELL IS GOING ON? 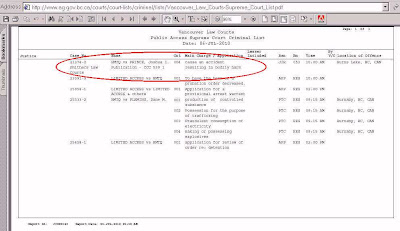 In spite of the word yesterday that court was supposed to start today in room 54 with Allan Wallace of CIBC on the stand - replacing the useless amnesiacal Martyn Brown - the schedule shown above indicates no such thing at approximately 11:00AM or 15 minutes before the scheduled start time.

How to interpret this?

Well we could assume that means court is DEFINITELY ON by using the logic suggested by Gary E here yesterday. He suggested that they only announce court sittings when they know it isn't going to happen and when it really is going to happen - the last thing they want to do is tell anyone. Before some concern troll reader sends in a comment suggesting paranoia on my part, read the last few years of entries here and see how often this very type of mis-information has occurred in the history of this trial.

Another funny thing, and I mentioned  this tendency recently,  is the fact that the top case (circled in red) in this daily docket of less than a page refers to a motor vehicle accident that occurred in Burns Lake and is apparently being held in the courthouse in Smithers, BC. SO WHAT IN THE HELL IS IT EVEN DOING HERE?

And will we find the schedule for Basi, Virk and Basi (or "LIMITED ACCESS") under the Smithers docket?

Disingeneous, mis-direction, lying, OBSTRUCTION OF JUSTICE - I don't know, but some or all of the preceding and more..............

People can't screw up this regularly unless they are doing it on purpose - or their employer doesn't care. But we know that the Campbell Crime Family pays its minions the best possible wages (ie Admiral Squarehead Hahn of BC Ferries who gets 6 times his equivalent in Washington State so Washington State doesn't poach him, supposedly) so we can be served by the best. Just like Basi et. al were most likely only doing their masters' bidding (and now taking the fall for future considerations) the incompetent performance of the Court Services Online is only serving the interests of those for whom any exposure of the truth would lead to loss of office and likely LOSS OF FREEDOM to walk the streets.

Comments:
Koot go back to the "completed" Court lists. They say court resumes at 2pm today. I don't know whether that has been changed from another time since yesterday but to resume at 2pm today when that is usually around the time that court adjourns for the day tells me something is definitely up. Could it be that there are further "discovery" deliberations? Since we know that discovery in this case like debate on the HST was cut off at the knees.

Interesting Gary, as I went to the Completed Lists this morning around 11:00am also and there were NO RESULTS ENTERED for Basi, Virk or Basi at that time and just a blank under next court appearance, or whatever they call it. I made screen shots of page 8 and 9, the pages with the BVB cases and will add them to the posting in small form, but just click on them to read them.

E.M. I don't know what you are referring to re: JSB comment

- you could email me at kootcoot@hotmail.com

- I have been having trouble publishing comments this morning and locally we have been experiencing power failures off and on since last night - but as far as I can tell every comment I've received has been published, even though I've had to make multiple attempts on some of them.

The comments here and at Grant's place are showing zero. Yet mine are coming up with all correct numbers.

Completed court docket @ 2 40 Tues. for Mon. July 5th says next appearance July 06. Also noted many of the cases it stated publication 517- cant rememebr the others, wierd 23299 does not have publication (ban) noted.

Just checked facebook, I may have missed messages, or they havent been posted yet, but Bill Tieleman did not make court yesterday, He was on his way and was in a car accident, His post from facebook 20 hours ago.
" Bill Tieleman is just back from St. Paul's emergency room - my car was T-boned by a Ford F150 pickup running a red light. I was checked out for possible heart attack due to chest pains but am okay, other than bloodied legs and sore chest and neck from the impact . No Basi-Virk reporting for me today - I was on my way to BC Supreme Court when I was taken out of the play!"--------

Prayers out to Bill T,speedy recovery, We need You, hopefully it wasn't One of Gordon C's cronies driving pick up truck, JOKE.

Neal Hall has the story in Vancouver Sun,

It's also in The Province,

And The Globe and Mail.

The court case didn't resume until 2pm this afternoon. At which time the jury was summoned into the courtroom and told they would be given tomorrow off, as there wasn't enough time to introduce a new witness. So court is adjourned until September 13th.

I can't wait to get home (Sun. the 11th, I think) and start drilling on the BC Supreme Court directory

to find the official desks capable of receiving an application to have the publication on the BC Rail trial lifted -- or partially-lifted -- so that there's reasonable public access to the facts being presented.

KOOT: it seems divinely ordained that you've been managing TLR while I'm away ... with current developments so suited to your style, your ticking-time-bomb vocabulary, and your fearlessness in describing the courtroom scenes where Case #23299 is concerned. Thanks, thanks, thanks!

More thanks to E.M., Gary E, and to those who aren't fazed by technical glitches in the comments section. I do believe they're temporary.

Special thanks to Anon 5:52 for confirmation of Madam MacK's shut-down ruling today.

Speaking of electronic communicating, I wish somebody would talk about TWITTER as part of our tool-kit as we extend our coverage of the BC Rail trial. Is Twitter a good idea? How would we get started?

I'd like to make best possible use of the next 2+ months, so that when Madam MacK's courtroom is recalled on Sept. 13, its public gallery is packed with citizen observers,

and on the sidewalk outside Vancouver Law Courts bldg at 800 Smyth St., there might even be pickets carrying a few choice messages. The treasured geeks among us might take i-photos to forward to those cash-strapped newspapers which are always asking for free photos.

We have a wide-open opportunity to prepare for SEPTEMBER 13, 2010.

For example: July 14, 2010, will mark the 6th anniversary of the tainted BC Rail-CN Deal. We (the previous owners from whom the railway was stolen) are still asking: "Show us the deal". And that, after all, is what this trial is all about, isn't it?
.

A communial webpage on Facebook or Twitter (or both) would be a great idea. Campbell is using these sites so why can't the very concerned public. I suspect that someone would need to act as some sort of moderator as passions tend to run very high over our poor excuse of a man - Gordon "screw everybody" Campbell.

Very interesting all the Media are followers, Toronto Star , CBC, and he he he the Liberalparty!!!!!

I did My first Twitter-stole Your words Mary.
"See you in September" judge tells jury on Tuesday.
search Twitter
bcrailtrial

Wow, that was easy!

Good luck with Twitter, then ... and borrow anything you can use, from this site; that's what it's for.

Knowing (for sure) who is following the Twitter discussion, there must be tons of things you'd like to say to the followers.
.

The summer recess to kill an issue is, just to note, and old stock-in-trade and very recognizable Socred tactic....usually used for the House, here the same maneouvre being used to dilute proceedings of the Supreme Court.

Surely this is not in the best interests of the neutrality and sanctity of the jury? We already know the publication ban isn't in the interest of the public, but the recess doesn't seem to give any thought to the risks of the jury being somehow affected by the more and more information that reaches them.

Hie them to a nunnery.....actually come to think of it Westminster Abbey in Mission has the perfect cloister to house a sequestered jury, and the monks would help keep jury tamperers and pesky bloggers and politicians bearing bags of money away from them.

Either that or put them up on Savary Island for a few months....