Today may also be Robin Mathews Day in BC Supreme Court. 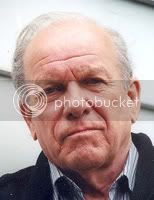 A Monstrous Canadian Miscarriage of Justice About To Unfold

... William Berardino was appointed – flying in the face of all Crown Counsel, all Special (Crown) Prosecutor, and other relevant Prosecutor legislation – as Special Crown Prosecutor.  We know that he was appointed by a ministry in which the Attorney General, Geoff Plant, had been his partner and colleague for seven years.  The Deputy Attorney General, Allan Seckel, had been partner and colleague of Mr. Berardino for eleven years.  By every statement and every intention of legislation creating the position of Special (Crown) Prosecutor, the appointment of William Berardino was improper  ...

Comments:
I know it does not really belong here but
Check this out Mary Gordo's arrest records.

Using the search you can also find Frank Alconcel remember him?

Makes me wonder how it was so easy for Gordo to arrange all that.

I think Frank Alconcel was the cell-mate who talked to the Vancouver journalist for her story (which didn't get a whole lot of distribution).

Holy Smoke (pardon the pun)... when it gets to the point where The Great Satan finds Vaughn Palmer-style of journalism "shameful",

we really are in deep, deep brimestone.

Or some such substance.
.

Put in like below just Alconcel and Frank is all that is required Submit : once there review 2nd and third pages and compare dates with Gordo you will see they were there at the same time JW

Continuing with "Drunk in Maui" ...

that reporter's name is Petti Fong and by typing her name into the search box, that old story pops up. Wow, what a read it is, too. Click here:

Many thanks for your contribution and your patience.

What a neat system.

I have to be out & about today but I hope more comments come in, about these things.

Mary, assuming you are searching some American court records, the date 10-01-2003, would indicate my birthday October 1 (though I celebrated A birthday that day, I wasn't born that year). I think Gordo was popped in January, wasn't he? In Amerika that is 01-10-2003

After watching this documentary all of you will see a correlation with this Trial/Campbell government and the Invisible New World Order Empire Jason Berma speaks of in this documentary.

No doubt in my mind Gordon Campbell is a NWO shill.

The instructions are perfectly clear, as you will see if you go to that U.S. court records site.

I wasn't inventing some new method which only God & I can understand.

I did what they said: day/month/year. No dice. I tried again, leaving off the "0". No dice.

Sounds like some more members of the MSM agree with Robin's comments about Bill Berardino.

I simply cannot believe the stories that have been unearthed regarding just how many special prosecutors have been donors to the Liberal Party in recent years.

The Vancouver Sun put together a list yesterday of eight different special prosecutors who have given money to this province’s ruling party in recent years.

Let me say right off the bat that I am shocked that any special prosecutor would be hired by the government after making political contributions to the party they are investigating.

One of the names on the list stands out in big, bold letters to me:

Berardino was the special prosecutor appointed in the notorious BC rail trial that led to the now infamous raid on the BC legislature in 2003.

After working on the case for more than a year, Berardino’s law firm gave 500 dollars to the election campaign of Wally Oppal, the man who would become BC’s attorney general.

When asked about the donations, Berardino acknowledges that he did give money. He says it doesn’t put him in a conflict of interest and it’s no big deal.

I on the other hand think it’s a very big deal.

The whole point of using a special prosecutor in a case is to appoint someone who would be above political influence. The fact that the Liberal government has appointed not one or two, but eight different special prosecutors who have donated money to their party is quite frankly staggering.

The legal system is supposed to be set up to avoid any and all conficts of interest, both real and perceived.

How anyone could say these eight incidents do not cause a perceived conflict of interest is far beyond me.

But then again what do I know? I’m not a fancy high-priced lawyer.

I’m just a regular citizen of British Columbia, not some wealthy donor to the Liberal Party.

This is Adam Stirling.

Sorry Mary, I was just trying to be helpful, because American practice DOES tend to be Month-Day-Year - I should know I went to school there for two dozen years.

I do believe that either day-month-year or year-month-day are more logical from smallest to largest or the opposite, not middle - firs last

Data formatting is one of those little things that trip up non-geeks regularly when they are getting frustrated with computers and indeed was a factor in Y2K.

Mary and koot: this thing about American court records is a bit obscure to a bystander; is what the issue is that Gordo's records of being in jail have disappeared? Or what?

If so, or anything like that, might be worth getting a Hawaiian newspaper onto the issue, as to how a politician from another country can fiddle with American justice to cover his own ass....

My head hurts trying to remember who is who, and what when where, LOL. This might be old news.

Mr. Justice Harris has practised with Hunter Litigation Chambers since 2006. He worked as a law clerk with the B.C. Court of Appeal from 1985 to 1986, and later with the firms Russell & Dumoulin (1986-2000) and Berardino & Harris (2000-2006). He has extensive experience in civil litigation, including product liability, class action, personal injury, corporate, commercial, real estate, constitutional and mass tort litigation. He was appointed Queen’s Counsel in 2004.
------

The Supreme Court of British Columbia will hold a Welcoming Ceremony for Madam Justice Miriam A. Maisonville and Mr. Justice David C. Harris at 9:15 a.m. on Thursday, May 6, 2010 at the Vancouver Law Courts in Courtroom 55. Members of the public are welcome to attend the Welcoming Ceremony.

Remember the Tobacco Industry post here back in December 2009.

David HARRIS. Special prosecutor team.
Harris is law partner of Bill Berardino and had some early interactions with RCMP before the legislature raid -- including telling them directly to not link it with "organized crime" -- which they did anyway. Harris has had no apparent role in recent years.
------

Leonard Krog in debate May 6
"L. Krog: We know that Harper Grey, since 2001, has done more than $7 million worth of work with ICBC. ICBC reports to the Solicitor General. [DRAFT TRANSCRIPT ONLY]

L. Krog: Members of that side of the House would have us believe that no one in the B.C. Liberal Party — no one — knew that a law firm that had donated literally tens of thousands of dollars to the B.C. Liberal Party was also charged with investigating a B.C. Liberal dirty tricks scandal. It turns out that the same law firm also did millions of dollars of work for the former Solicitor General's ministry.
The question is very simple. How is it that no one on that side of the House noticed or bothered to report this
---
AOL News
Polygamist Winston Blackmore is calling for the removal of George MacIntosh, the special prosecutor who will be arguing that Canada's ban on multiple marriages is unconstitutional in a case going before the B.C. Supreme Court this fall.

Blackmore said MacIntosh should step aside because he's in a conflict of interest after making donations to the B.C. Liberals.

He said "it smells bad" for the government to hire one of its supporters to argue against its own position.